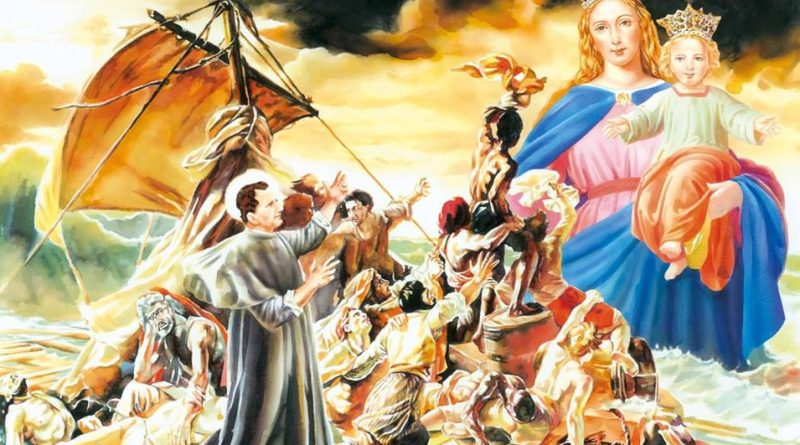 Patronage: apprentices, boys, editors, Mexican young people, laborers, schoolchildren,students, young people
.
Saint John Bosco accomplished what many people considered an impossibility; he walked through the streets of Turin, Italy, looking for the dirtiest, roughest urchins he could find, then made good men of them. His extraordinary success can be summed up in the words of his patron Saint, Francis de Sales: The measure of his love was that he loved without measure.
.
John’s knowledge of poverty was firsthand. He was born in 1815 in the village of Becchi in the Piedmont district of northern Italy, and reared on his parents’ small farm. When his father died, Margaret Bosco and her three sons found it harder than ever to support themselves, and while John was still a small boy he had to join his brothers in the farm work. Although his life was hard, he was a happy, imaginative child. Even as a boy, John found innocent fun compatible with religion. To amuse his friends he learned how to juggle and walk a tightrope; but he would entertain them only on condition that each performance begin and end with a prayer.
.
As he grew older, John began to think of becoming a priest, but poverty and lack of education made this seem impossible. A kindly priest recognized his intelligence, however, and gave him his first encouragement, teaching him to read and write. By taking odd jobs in the village, and through the help of his mother and some charitable neighbors, John managed to get through school and find admittance to the diocesan seminary of nearby Turin. As a seminarian he devoted his spare time to looking after the ragamuffins who roamed the slums of the city. Every Sunday he taught them catechism, supervised their games and entertained them with stories and tricks; before long his kindness had won their confidence, and his Sunday School became a ritual with them.
.
After his ordination in 1841, he became assistant to the chaplain of an orphanage at Valocco, on the outskirts of Turin. This position was short-lived, for when he insisted that his Sunday-school boys be allowed to play on the orphanage grounds, they were turned away, and he resigned. He began looking for a permanent home for them, but no decent neighborhood would accept the noisy crowd. At last, in a rather tumbledown section of the city, where no one was likely to protest, the first oratory was established and named for Saint Francis de Sales. At first the boys attended school elsewhere, but as more teachers volunteered their time, classes were held at the house. Enrollment increased so rapidly that by 1849 there were three oratories in various places in the city.
.
For a long time Don Bosco had considered founding an Order to carry on his work, and this idea was supported by a notoriously anticlerical cabinet minister named Rattazzi. Rattazzi had seen the results of his work, and although an Italian law forbade the founding of religious communities at that time, he promised government support. The founder-priest went to Rome in 1858 and, at the suggestion of Pope Pius IX, drew up a Rule for his community, the Society of Saint Francis de Sales (Salesians). Four years later he founded an Order for women, theDaughters of Mary, Help of Christians, to care for abandoned girls. Finally, to supplement the work of both congregations, he organized an association of lay people interested in aiding their work.
.
Exhausted from touring Europe to raise funds for a new church in Rome, Don Bosco died on January 31, 1888. He was canonized in 1934 by Pope Pius XI. The work of John Bosco continues today in over a thousand Salesian oratories throughout the world. No modern Saint has captured the heart of the world more rapidly than this smiling peasant-priest from Turin, who believed that to give complete trust and love is the most effective way to nourish virtue in others.
.
Prayer to Venerate Any Saint
.
Saint John Bosco: Feast Day January 31
.
Rev. 8:3-4 [3] And another angel came, and stood before the altar, having a golden censer; and there was given to him much incense, that he should offer of the prayers of all saints upon the golden altar, which is before the throne of God. [4] And the smoke of the incense of the prayers of the saints ascended up before God from the hand of the angel.
.
ETERNAL Father, I wish to honor St. (Name), and I give You thanks for all the graces You have bestowed upon him (her). I ask You to please increase grace in my soul through the merits of this saint, and I commit the end of my life to him (her) by this special prayer, so that by virtue of Your goodness and promise, St. (Name) might be my advocate and provide whatever is needed at that hour. Amen.
.
PROMISE: “When you wish to honor any particular saint and give Me thanks for all the graces I have bestowed on that saint, I increase grace in your soul through the merits of that saint. When you commit the end of your life to any of the saints by special prayers, I appoint those saints to be your advocates and to provide whatever you need at that hour.”-Our Lord to St. Gertrude
.
Blessed Anne Catherine Emmerich revealed in her Visions that saints are particularly powerful on their feast days and should be invoked then.