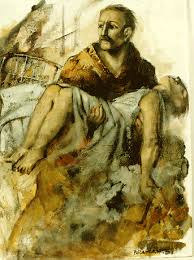 Saint John of God was always considered an impulsive man, one night, St. John heard that the Royal Hospital of Granada was on fire where many of his poor souls were. When he rushed to the scene, he saw that people were just standing there watching the fire burn to afraid to dare go into the hospital to save the poor people inside due to the raging inferno. This non-action was unthinkable to St. John, and he rushed inside, rescuing all the patients inside. Once he knew that all the patients were safe, St. John did the unthinkable to most and ran back into the building and started throwing items such as blankets and mattresses out the windows of the hospital. In his mission, St. John knew the importance of these goods for caring for the sick and through his great love for for the sick wanted to salvage as much as possible. By this point, the city had brought a canon to try to destroy and separate the burning part of the hospital from the non-burning portion, in its best efforts to contain the fire. However, St. John could not accept this. He ran up to the roof and started separating the two parts of the hospital with his axe thinking the cannons would destroy what was left of the hospital. In what could only be called a miracle and was indeed called that by all the witnesses, Saint John was successful. But as soon as acomplishing this miracle he fell through the burning roof. Bystanders were sure that he had perished in the fire, and that no one could survive those flames until he appeared out of the smoke and ashes unharmed. The flame of Divine Love which burned in his heart surpassed that of the intensity of the fire.