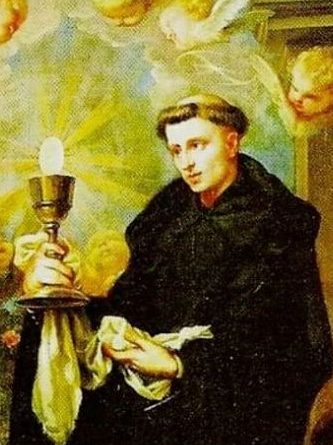 Patronage: Candon City
.
Saint John, one of the greatest preachers Spain has ever known, was born at St. Fagondez, and from his early youth gave signs of his future sanctity. He was the fruit of the ardent prayers of his parents after sixteen years of sterility; God blessed them afterwards with several children. He was entrusted to the Benedictines of the monastery of St. Fagondez for his education. He distributed to the poor virtually all the wealth accruing to him from several benefices, while he himself lived in great poverty; but soon he renounced all of these and obtained from his bishop permission to study theology in Salamanca. As a young priest he was already regarded as a Saint, so ardent was his devotion at Holy Mass. He entered the Order of Saint Augustine soon after he had bestowed on a poor man half of his clothing, and the following night experienced so great an increase in the love of God, that he referred to this as his conversion.
.
He was a model religious, and soon was entrusted with important offices in his Order — master of novices, definitor for the province, and prior of the convent of the city of Salamanca. He commanded well because he knew so well how to obey. When he observed in himself a slight defect in his obedience, he repaired it with extraordinary penances. Often while offering the adorable Sacrifice with tender piety, he enjoyed the sight of Jesus in glory, and held sweet colloquies with Him. The ineffable bliss of these moments caused him to spend much more time than the other priests in celebrating Holy Mass; and everyone was complaining. It was only when his Superior forbid him to delay in this way that he was obliged to acknowledge the favors he enjoyed.
.
The power of his personal holiness was seen in his preaching, which produced a complete reformation of morals in Salamanca. He had a special gift for reconciling differences, and was able to put an end to the quarrels and feuds among noblemen, at that period very common and fatal. The boldness shown by Saint John in reproving vice endangered his life. A powerful nobleman, having been corrected by the Saint for oppressing his vassals, sent two assassins to slay him; but the remarkable holiness of the Saint’s aspect, result of the peace constantly reigning in his soul, struck such awe into their minds that they could not execute their purpose, and humbly begged his forgiveness. The nobleman himself, falling sick, was brought to repentance, and recovered his health by the prayers of the Saint whom he had endeavored to murder.
.
Saint John was also very zealous in denouncing the vices of impurity, and it was in defense of holy purity that he met his death. A lady of noble birth but evil life, whose companion in sin he had converted, contrived to administer a fatal poison to the Saint. After several months of terrible suffering, borne with unvarying patience, Saint John went to his reward on June 11, 1479. This painful death and the cause for which he suffered it, have caused several of his historians and panegyrists to say that he won a martyr’s crown. A great many striking miracles followed at his tomb and elsewhere, even by the simple invocation of his name. He was canonized in 1690 by Pope Alexander VIII.
.
Reflection. All men desire peace, but only those enjoy it who, like Saint John, are completely dead to themselves, and bear all things with love for Christ.

Prayer to Venerate Any Saint
.
Saint John of Sahagun: Feast Day June 12
.
I desire therefore, first of all, that supplications, prayers, intercessions, and thanksgivings be made for all men: For kings, and for all that are in high station: that we may lead a quiet and a peaceable life in all piety and chastity. For this is good and acceptable in the sight of God our Saviour, Who will have all men to be saved, and to come to the knowledge of the truth. (1 Timothy 2:1-4)
.
And another angel came, and stood before the altar, having a golden censer; and there was given to him much incense, that he should offer of the prayers of all saints upon the golden altar, which is before the throne of God. And the smoke of the incense of the prayers of the saints ascended up before God from the hand of the angel. (Rev. 8:3-4)
.
ETERNAL Father, I wish to honor St. (Name), and I give Thee thanks for all the graces Thou have bestowed upon him (her). I ask Thee to please increase grace in my soul through the merits of this saint, and I commit the end of my life to him (her) by this special prayer, so that by virtue of Thy goodness and promise, St. (Name) might be my advocate and provide whatever is needed at that hour. Amen.
.
PROMISE: “When you wish to honor any particular saint and give Me thanks for all the graces I have bestowed on that saint, I increase grace in your soul through the merits of that saint. When you commit the end of your life to any of the saints by special prayers, I appoint those saints to be your advocates and to provide whatever you need at that hour.”-Our Lord to St. Gertrude
.
Blessed Anne Catherine Emmerich revealed in her Visions that saints are particularly powerful on their feast days and should be invoked then