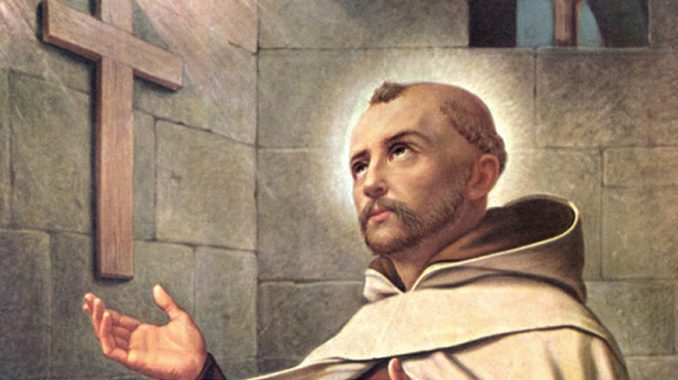 Patronage:Contemplative life; contemplatives; mystical theology; mystics; Spanish poets
Saint John of the Cross was born near Avila in Spain. As a child, he was playing near a pond one day. He slid into the depths of the water, but came up unharmed and did not sink again. A tall and beautiful Lady came to offer him Her hand. No, said the child, You are too beautiful; my hand will dirty Yours. Then an elderly gentleman appeared on the shore and extended his staff to the child to bring him to shore. These two were Mary and Joseph. Another time he fell into a well, and it was expected he would be retrieved lifeless. But he was seated and waiting peacefully. A beautiful lady, he said, took me into Her cloak and sheltered me. Thus John grew up under the gaze of Mary.
One day he was praying Our Lord to make known his vocation to him, and an interior voice said to him: You will enter a religious Order, whose primitive fervor you will restore. He was twenty-one years old when he entered Carmel, and although he concealed his exceptional works, he outshone all his brethren. He dwelt in an obscure corner whose window opened upon the chapel, opposite the Most Blessed Sacrament. He wore around his waist an iron chain full of sharp points, and over it a tight vestment made of reeds joined by large knots. His disciplines were so cruel that his blood flowed in abundance. The priesthood only redoubled his desire for perfection. He thought of going to bury his existence in the Carthusian solitude, when Saint Teresa, whom God enlightened as to his merit, made him the confidant of her projects for the reform of Carmel and asked him to be her auxiliary.
John retired alone to a poor and inadequate dwelling and began a new kind of life, conformed with the primitive Rules of the Order of Carmel. Shortly afterwards two companions came to join him; the reform was founded. It was not without storms that it developed, for hell seemed to rage and labor against it, and if the people venerated John as a Saint, he had to accept, from those who should have seconded him, incredible persecutions, insults, calumnies, and even prison. When Our Lord told him He was pleased with him, and asked him what reward he wished, the humble religious replied: To suffer and to be scorned for You. His reform, though approved by the General of the Order, was rejected by the older friars, who condemned the Saint as a fugitive and an apostate and cast him into prison, from which he only escaped, after nine months’ suffering, with the help of Heaven and at the risk of his life. He took refuge with the Carmelite nuns for a time, saying his experience in prison had been an extraordinary grace for him. Twice again, before his death, he was shamefully persecuted by his brethren, and publicly disgraced.
When he fell ill, he was given a choice of monasteries to which he might go; he chose the one governed by a religious whom he had once reprimanded and who could never pardon him for it. In effect, he was left untended most of the time, during his last illness. But at his death the room was filled with a marvelous light, and his unhappy Prior recognized his error, and that he had mistreated a Saint. After a first exhumation of his remains, they were found intact; many others followed, the last one in 1955. The body was at that time found to be entirely moist and flexible still.
Saint John wrote spiritual books of sublime elevation. A book printed in 1923 which has now become famous, authored by a Dominican theologian*, justly attributed to Saint John and to Saint Thomas Aquinas, whom the Carmelite Saint followed, the indisputable foundations for exact ascetic and mystical theology. He was proclaimed a Doctor of the Church in 1926 by Pope Pius XI.
Prayer to Venerate Any Saint
Saint John of the Cross: Feast Day November 24
Rev. 8:3-4 [3] And another angel came, and stood before the altar, having a golden censer; and there was given to him much incense, that he should offer of the prayers of all saints upon the golden altar, which is before the throne of God. [4] And the smoke of the incense of the prayers of the saints ascended up before God from the hand of the angel.
ETERNAL Father, I wish to honor St. (Name), and I give You thanks for all the graces You have bestowed upon him (her). I ask You to please increase grace in my soul through the merits of this saint, and I commit the end of my life to him (her) by this special prayer, so that by virtue of Your goodness and promise, St. (Name) might be my advocate and provide whatever is needed at that hour. Amen.
PROMISE: “When you wish to honor any particular saint and give Me thanks for all the graces I have bestowed on that saint, I increase grace in your soul through the merits of that saint. When you commit the end of your life to any of the saints by special prayers, I appoint those saints to be your advocates and to provide whatever you need at that hour.”-Our Lord to St. Gertrude
Blessed Anne Catherine Emmerich revealed in her Visions that saints are particularly powerful on their feast days and should be invoked then.