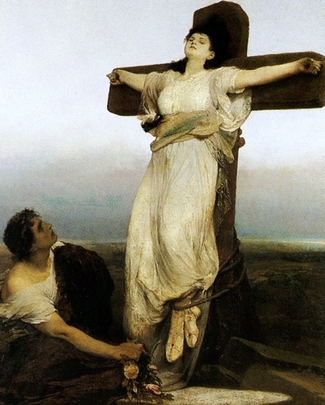 Saint Julia was a noble virgin of Carthage, who, when the city was taken by Genseric in 439, was sold for a slave to a pagan merchant of Syria. In the most mortifying employments of her station, by cheerfulness and patience she found a happiness and comfort which the world could not give. Whenever she was not employed in household affairs, her time was devoted to prayer and reading books of piety.

Her master, who was charmed with her fidelity and other virtues, thought proper to take her with him on one of his voyages to Gaul. When he reached the northern part of Corsica, he cast anchor and went ashore to join the pagans of the place in an idolatrous festival. Julia was left at some distance, because she would not be defiled by the superstitious ceremonies, which she openly spurned. The governor of the island, Felix, a bigoted pagan, asked who this woman was who dared to insult the gods. The merchant informed him that she was a Christian, and that all his authority over her was too weak to prevail upon her to renounce her religion; nonetheless, he found her so diligent and faithful he could not part with her. The governor offered him four of his best slaves in exchange for her. But the merchant replied, No; all you are worth will not purchase her; for I would lose the most valuable thing I have in the world rather than be deprived of her.

Nonetheless Felix, while the inebriated merchant was asleep, attempted to compel her to sacrifice to his gods. He offered to procure her liberty if she would comply. The Saint made answer that she was as free as she desired to be, as long as she was allowed to serve Jesus Christ. The pagan, offended by her undaunted and resolute air, in a transport of rage caused her to be struck on the face, and the hair of her head to be torn off. Finally he ordered her to be hanged on a cross until she expired. Certain monks from the isle of Gorgon transported her relics there, but in 763 the king of Lombardy transferred them to Brescia, where her memory is celebrated with great devotion.

Reflection. Saint Julia, whether free or a slave, whether in prosperity or in adversity, was equally fervent and devout. She adored all the sweet designs of Providence; and far from complaining, she never ceased to praise and thank God for all His holy designs. God, by an admirable chain of events, raised her by her fidelity to the honors of a Saint, and to the dignity of a virgin and martyr.

I desire therefore, first of all, that supplications, prayers, intercessions, and thanksgivings be made for all men: For kings, and for all that are in high station: that we may lead a quiet and a peaceable life in all piety and chastity. For this is good and acceptable in the sight of God our Saviour, Who will have all men to be saved, and to come to the knowledge of the truth. (1 Timothy 2:1-4)

And another angel came, and stood before the altar, having a golden censer; and there was given to him much incense, that he should offer of the prayers of all saints upon the golden altar, which is before the throne of God. And the smoke of the incense of the prayers of the saints ascended up before God from the hand of the angel. (Rev. 8:3-4)