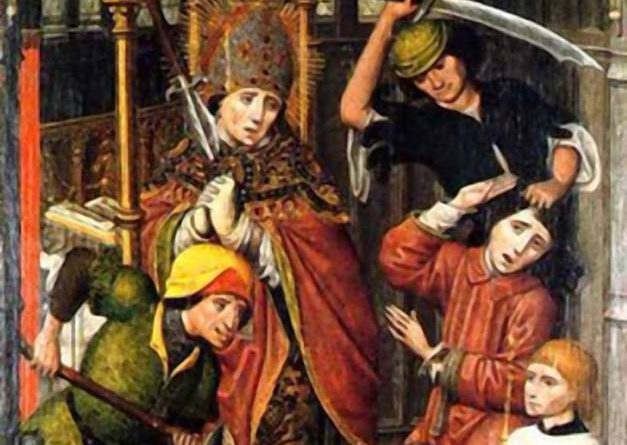 Saint Lambert, born about 640, was a native of Maestricht, the son of illustrious Christians; his noble father entrusted his education to the holy Bishop Saint Theodard. As a young man he wrought miracles, one day bringing forth a spring to quench the thirst of some workers building a church, and in this way he became known to all the city. When Saint Theodard was assassinated in the defense of the possessions of the church, Lambert was chosen by the people, at the age of only 21 years, to be his successor. He taught his flock the maxims of the Gospel and reproved vice with an apostolic liberty. His soul was perfectly nourished by grace and was totally dead to all earthly pleasures; his hands were open to distribute alms, his arms to receive those who were suffering, and his heart to take pity on the afflicted.
A revolution broke out a few years later and overturned the kingdom of Austrasia; our Saint was banished from his see because of his devotion to the former sovereign. He retired to the monastery of Stavelo, where the observance was very regular, and there he obeyed the rule as strictly as the youngest novice.
One incident will suffice to show with how perfect a sacrifice of himself he devoted his heart to serving God. As he was rising one night in winter to attend to his private devotions, he happened to let fall a wooden sandal. The Abbot, without asking who had caused the noise, gave orders that the offender go and pray before the cross which stood before the church door. Lambert, without any answer, went out into the court as he was, barefooted and covered only with his hair shirt; and in this condition he prayed for several hours, forgotten as he knelt before the cross. Finally, when they noticed the holy bishop there, covered with snow, the Abbot and the monks fell to their knees, and asked his pardon. God forgive you, he said, for thinking you stand in need of pardon for this action. As for myself, is it not in cold and nakedness that, according to Saint Paul, I am to discipline my flesh and serve God?
After seven years in the monastery he was recalled to his see. Although Saint Lambert had been personally enriched in the peace of his holy retirement, he had wept and continued to weep at seeing the majority of the churches of France laid waste. His zeal in denouncing the manifold and notorious disorders existing in his diocese, led to his assassination, brought about like that of Saint John the Baptist, by an unfortunate woman. She had led the king to repudiate his wife and enter publicly upon a scandalous life. Saint Lambert was slain by the sword in his house, on the 17th of December, 705.
Reflection: How noble and heroic is the virtue of fortitude! how necessary for every Christian, and especially for a pastor of souls, that neither worldly views nor fears may ever in the slightest warp his integrity or blind his judgment!
Prayer to Venerate Any Saint
Saint Lambert: Feast Day September 17
Rev. 8:3-4 [3] And another angel came, and stood before the altar, having a golden censer; and there was given to him much incense, that he should offer of the prayers of all saints upon the golden altar, which is before the throne of God. [4] And the smoke of the incense of the prayers of the saints ascended up before God from the hand of the angel.
ETERNAL Father, I wish to honor St. (Name), and I give You thanks for all the graces You have bestowed upon him (her). I ask You to please increase grace in my soul through the merits of this saint, and I commit the end of my life to him (her) by this special prayer, so that by virtue of Your goodness and promise, St. (Name) might be my advocate and provide whatever is needed at that hour. Amen.
PROMISE: “When you wish to honor any particular saint and give Me thanks for all the graces I have bestowed on that saint, I increase grace in your soul through the merits of that saint. When you commit the end of your life to any of the saints by special prayers, I appoint those saints to be your advocates and to provide whatever you need at that hour.”-Our Lord to St. Gertrude
Blessed Anne Catherine Emmerich revealed in her Visions that saints are particularly powerful on their feast days and should be invoked then.