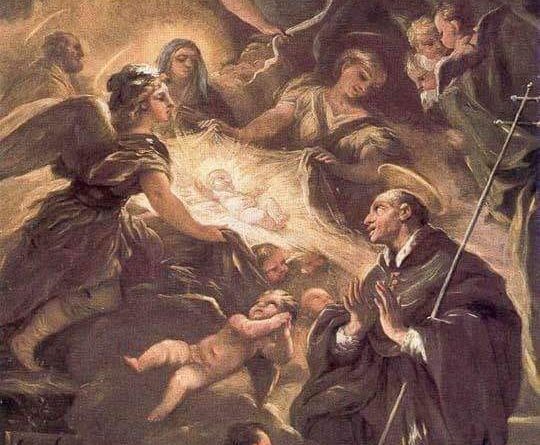 Lawrence, born in 1381, from his childhood longed to be a Saint, and when he was nineteen years of age he was given a vision of the Eternal Wisdom, in the form of a beautiful and noble Lady who told him to seek the only repose he would ever know in Her, the Eternal Wisdom of God. All earthly things paled in his eyes before the ineffable beauty of this sight, and as it faded away a void was left in his heart which none but God could fill. Refusing the offer of a brilliant marriage, at the age of nineteen he fled from his home in Venice and joined the Canons Regular of Saint George in their monastery, situated on a little island about a mile from Venice, where his uncle was a priest.
.
When Lawrence first entered religion, a nobleman went to dissuade him from the folly of thus sacrificing every earthly prospect. The young monk listened patiently to his friend’s affectionate appeal, which soon changed into scorn and violent abuse. Calmly and kindly he then replied. He pointed out the shortness of life, the uncertainty of earthly happiness, and the incomparable superiority of the prize he sought, to any pleasures his friend had named. The latter could make no answer; he felt in truth that Lawrence was wise, and he himself was the fool. And he too left the world, became a fellow-novice with the Saint, and eventually died a holy death.
.
As a monk, the mortification of Saint Lawrence was exemplary; he never drank outside of meals, and when urged to do so replied: If we cannot endure a little heat on earth, how will we bear that of Purgatory? He underwent two painful operations without saying any word except the holy name of Jesus. Before the second intervention, when the surgeon’s hand trembled, he said, Cut with vigor; your instrument cannot match the iron hooks used to tear the sides of the martyrs.
.
Ordained a priest, then elected Superior and General of his Order, Saint Lawrence strengthened his brethren. Humility keeps silent and does not become inflated in prosperity, whereas in adversity it is elevated, magnanimous, full of joy and an invincible courage. Few know what this virtue is; it is possessed only by those to whom God has given it by infusion, as a reward for their persevering efforts and their spirit of prayer. He encouraged frequent Communion, saying that the person who does not strive to become united with Him as frequently as possible has very little love for Jesus Christ. When he was consecrated bishop of his diocese in 1433, in the face of slander and insult he thoroughly reformed his see. He founded fifteen monasteries and many churches, and his cathedral became a model for all of Christendom. His door was never closed to the poor, but he himself lived like a poor monk.
.
His zeal led to his being appointed the first Patriarch of Venice, but he remained in heart and soul a humble priest, thirsting for the vision reserved for heaven. He had just finished writing his last work, The Degrees of Perfection, when finally the eternal day began to dawn. Are you preparing a bed of feathers for me? he said. No, my Lord was stretched on a hard and painful tree. Laid upon straw, he exclaimed in rapture, Good Jesus, behold, I come. He died in 1455, at the age of seventy-four.
.
Reflection: Ask Saint Lawrence Justinian to obtain for you such a sense of the perfections of God, that you too may have recourse to Him in all your needs and be at rest.
.
Prayer to Venerate Any Saint
.
Saint Lawrence Justinian: Feast Day September 5
.
Rev. 8:3-4 [3] And another angel came, and stood before the altar, having a golden censer; and there was given to him much incense, that he should offer of the prayers of all saints upon the golden altar, which is before the throne of God. [4] And the smoke of the incense of the prayers of the saints ascended up before God from the hand of the angel.
.
ETERNAL Father, I wish to honor St. (Name), and I give You thanks for all the graces You have bestowed upon him (her). I ask You to please increase grace in my soul through the merits of this saint, and I commit the end of my life to him (her) by this special prayer, so that by virtue of Your goodness and promise, St. (Name) might be my advocate and provide whatever is needed at that hour. Amen.
.
PROMISE: “When you wish to honor any particular saint and give Me thanks for all the graces I have bestowed on that saint, I increase grace in your soul through the merits of that saint. When you commit the end of your life to any of the saints by special prayers, I appoint those saints to be your advocates and to provide whatever you need at that hour.”-Our Lord to St. Gertrude