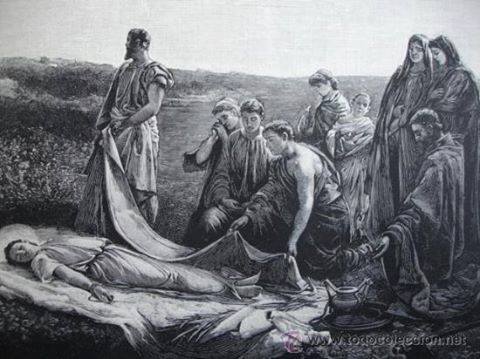 Patronage:Archdiocese of Toledo
.
Saint Leocadia was the fervent daughter of an illustrious Christian family of Toledo, apprehended and martyred in 303 by an order of Dacian, the cruel governor under Diocletian.
.
When Dacian arrived in Toledo, she was soon denounced. Summoned before his tribunal, she replied to his contemptuous words concerning the true religion that she considered herself infinitely happy to serve God and His Son Jesus Christ, and that nothing whatsoever would be able to make her renounce her religion. She was flogged until covered with blood, then imprisoned with threats. She went to the prison with joy, consoling the Christians along the route who deplored her condition, telling them to rejoice in the grace she received to suffer for her Lord and Spouse. It was in this prison that she heard of the incredibly cruel martyrdom inflicted on her compatriot, Saint Eulalia, and she was so grieved by these cruelties, and by the condition of the true servants of God in those days, that she prayed to be retired from this world. Her prayer was heard, and she expired peacefully there on December 9, 303, kissing a cross which the touch of her hand imprinted on the hard rock of the prison wall.
.
A church was built over her tomb, in which several archbishops of Toledo chose to be buried. Two other famous churches in Toledo bear her name, one built over the site of the prison, and the other at that of the paternal home. Saint Leocadia is honored as the principal patroness of the city. Her relics were kept in that church with great respect, until during the incursions of the Moors, they were conveyed to Oviedo, and again elsewhere, then they were eventually carried back to Toledo with great pomp, and placed in the great church there on the 26th of April, 1589.
.
Reflection: If we were not blinded by the world and the enchantment of its follies, and would choose to meditate frequently on the certain prospect of eternity and the uncertainty of the hour of our death, the precepts of Christ would produce in us the same fervent dispositions which they did in the primitive Christians. (Rev. Alban Butler)
.
Prayer to Venerate Any Saint
.
Saint Leocadia of Toledo: Feast Day December 9
.
Rev. 8:3-4 And another angel came, and stood before the altar, having a golden censer; and there was given to him much incense, that he should offer of the prayers of all saints upon the golden altar, which is before the throne of God. And the smoke of the incense of the prayers of the saints ascended up before God from the hand of the angel.
.
ETERNAL Father, I wish to honor St. (Name), and I give You thanks for all the graces You have bestowed upon him (her). I ask You to please increase grace in my soul through the merits of this saint, and I commit the end of my life to him (her) by this special prayer, so that by virtue of Your goodness and promise, St. (Name) might be my advocate and provide whatever is needed at that hour. Amen.
.
PROMISE: “When you wish to honor any particular saint and give Me thanks for all the graces I have bestowed on that saint, I increase grace in your soul through the merits of that saint. When you commit the end of your life to any of the saints by special prayers, I appoint those saints to be your advocates and to provide whatever you need at that hour.”-Our Lord to St. Gertrude
.
Blessed Anne Catherine Emmerich revealed in her Visions that saints are particularly powerful on their feast days and should be invoked then.