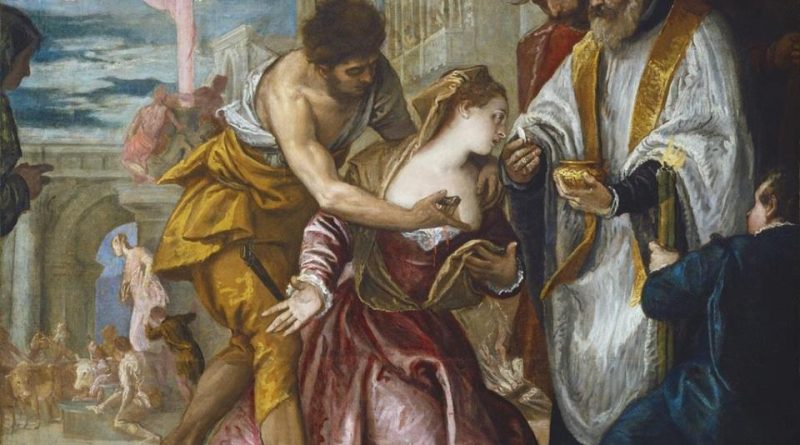 Patronage: blind; martyrs; Perugia, Italy; Mtarfa, Malta; epidemics; salesmen,Syracuse, Italy, throat infections, writers
.
Saint Lucy was a young Christian maiden of Syracuse in Sicily. She had already offered her virginity to God and refused to marry, when her mother pressed her to accept the offer of a young pagan. The mother was afflicted afterwards for several years by an issue of blood, and all human remedies were ineffectual. Lucy reminded her mother that a woman in the Gospel, suffering from the same disorder, had been healed by the divine power. They determined to make a journey to Catania, a port of Sicily, where the tomb of Saint Agatha, martyred in 251, was already a site of pilgrimage. Saint Agatha, Lucy said, stands ever in the sight of Him for whom she died. Only touch her sepulchre with faith, and you will be healed. The Saint of Catania had already saved that city, when Mount Etna had erupted the year after her martyrdom: some frightened pagans, seeing a course of lava descending directly toward the city, had uncovered her tomb, and at once it had stopped.
.
Saint Lucy and her mother spent an entire night praying by the tomb, until, overcome by weariness, both fell asleep. Saint Agatha appeared in vision to Saint Lucy, and addressing her sister in the faith, foretold her mother’s recovery and Lucy’s future martyrdom: You will soon be the glory of Syracuse, as I am of Catania. At that instant the cure was effected; and in her gratitude the mother allowed her daughter to distribute her wealth among the poor, and to conserve her virginity.
.
The young man who had sought her hand in marriage denounced her as a Christian during the persecution of Diocletian, but Our Lord, by a special miracle, saved from outrage this virgin He had chosen for His own. The executioners who would have taken her to a house of ill fame were unable to move her. The exasperated prefect gave orders to attach her by cords to harnessed bulls, but the bulls, too, did not succeed, and he accused her of being a magician. How can you, a feeble woman, triumph over a thousand men? She replied, Bring ten thousand, and they will not be able to combat against God! A fire kindled around her did her no harm, though she was covered with resin and oil. When a sword was plunged into her heart, the promise made at the tomb of Saint Agatha was fulfilled. Saint Lucy died, predicting peace for the Church.
.
Reflection: The Saints had to bear sufferings and temptations greater far than any of ours. How did they overcome them? By the love of Christ. Nourish this pure love by meditating on the mysteries of Christ’s life; and, above all, by devotion to the Holy Eucharist, which is the antidote against sin and the pledge of eternal life.
.
Prayer to Venerate Any Saint
.
Saint Lucy of Syracuse: Feast Day December 13
.
Rev. 8:3-4 And another angel came, and stood before the altar, having a golden censer; and there was given to him much incense, that he should offer of the prayers of all saints upon the golden altar, which is before the throne of God. And the smoke of the incense of the prayers of the saints ascended up before God from the hand of the angel.
.
ETERNAL Father, I wish to honor St. (Name), and I give You thanks for all the graces You have bestowed upon him (her). I ask You to please increase grace in my soul through the merits of this saint, and I commit the end of my life to him (her) by this special prayer, so that by virtue of Your goodness and promise, St. (Name) might be my advocate and provide whatever is needed at that hour. Amen.
.
PROMISE: “When you wish to honor any particular saint and give Me thanks for all the graces I have bestowed on that saint, I increase grace in your soul through the merits of that saint. When you commit the end of your life to any of the saints by special prayers, I appoint those saints to be your advocates and to provide whatever you need at that hour.”-Our Lord to St. Gertrude
.
Blessed Anne Catherine Emmerich revealed in her Visions that saints are particularly powerful on their feast days and should be invoked then.