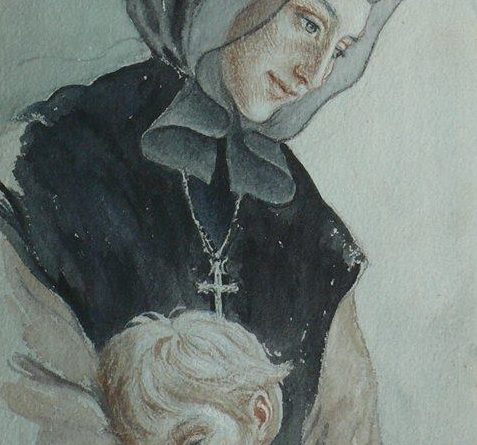 Patronage: widows, difficult marriages
.
The oldest of six children, at seven years of age Mary Margaret Dufrost, born at Varennes near Montreal, had already lost her courageous soldier-father. After receiving only two years of excellent education in Quebec City with the Ursuline nuns, she was obliged to return to Varennes before her twelfth birthday, to assist her mother to bring up her five younger brothers and sisters. The Sisters had foreseen the heavy responsibilities which would come upon her, and under their tutelage, as they later testified, she had redoubled her activity and application to all her duties. By means of a subsidy granted by the king of France to the families of his deceased military officers, the little family was able to remain together.
.
One day, some sixty years later, Mother Margaret d’Youville, Foundress of a Congregation of Sisters of Charity, would be known to the people of Quebec as the Providence of Montreal. It became proverbial among the Church’s authorities, even before she died, when there was a charitable work to do, to ask the Grey Nuns; they never refuse a mission. This was indeed an honorable reputation; but in 1730 the twenty-six year-old widow of Francis d’Youville, seigneur of La Découverte, alone with two sons to bring up, could not have imagined such honor, nor what Providence was holding in store for her already strong and experienced charity.
.
Saint Margaret was living in Montreal with her two sons at the death of Mr. d’Youville. It was soon evident that the pious widow would seek no distraction amid the world’s frivolities. She took in sewing and opened a little business, thus becoming known in the city; half of her earnings were always dedicated to her children’s Christian instruction. Both of her sons would later become priests. These occupations were not enough, however, to occupy her time; she visited prisoners, cared for the dying, brought peace to many troubled households, and even aided the poor financially. Her work with the unfortunate soon brought to her three apostolic young hearts, to offer their assistance. The four young women put their savings in common, and kneeling before a little statue of the Blessed Virgin, vowed their lives to the care of the poor. They rented a house, and soon received five suffering members of the Mystical Body of Christ as their charges.
.
The young missionaries did not escape the harsh opinions which always test the perseverance of those who desire to serve God in the person of the unfortunate. Undisciplined tongues accused them of bootlegging alcohol and even of making abundant use of it themselves. Mother d’Youville prayed to the Eternal Father, to whom she would always have an outstanding devotion, that she might not, during her trials, lose her good spiritual director who was ill; she already had lost her closest companion by death. The director was cured, but the little hospital burnt down in January of 1745. The misery of the little group won sympathy for them, and soon lodging, clothes and food were offered them.
.
Their destitution drew the attention of city authorities, who at that time were wondering what to do about the city hospital, overburdened with large debts and without sufficient personnel to staff it. When Mother d’Youville offered to take on both the debts and the labors, they were very happy indeed to accept her offer. With five companions, nine indigents and two lady-boarders, she entered the hospital in 1747. There a new difficulty for the foundress would soon make its appearance; the work still had enemies, and in 1750 plans were made, without consulting her, to merge it with another of similar nature, staffed by the nursing nuns of Quebec City. Finally an appeal made by the Foundress to the king of France, Louis XV, elicited his command that the decision of the local authorities be canceled, and she was authorized in 1752 to keep the hospital and to found a Community.
.
It was not only the sick who were the object of Saint Margaret d’Youville’s loving care. Foundling children, prisoners, orphans, the handicapped, the aged, were soon the cherished beneficiaries of the Grey Nuns’ indefatigable solicitude. Their foundress passed to her reward in 1771; and that night a large luminous cross appeared in the Montreal skies, attesting the death of a Saint. But her community continued and has been richly blessed, not only by the poor it has strengthened for the combats of life, but by the Father of the Poor Himself, who in 150 years gave it extension to fifteen dioceses of North America. The Grey Nuns have labored in the most difficult missions of the extreme north of Canada, as well as in a dozen cities of the more southerly provinces and the United States. Their self-effacement, their missionary spirit, their hardy courage in the face of the rudest living conditions, have earned the admiration of all who know them.
.
Prayer to Venerate Any Saint
.
Saint Margaret d’Youville: Feast Day December 23
.
Rev. 8:3-4 [3] And another angel came, and stood before the altar, having a golden censer; and there was given to him much incense, that he should offer of the prayers of all saints upon the golden altar, which is before the throne of God. [4] And the smoke of the incense of the prayers of the saints ascended up before God from the hand of the angel.

ETERNAL Father, I wish to honor St. (Name), and I give You thanks for all the graces You have bestowed upon him (her). I ask You to please increase grace in my soul through the merits of this saint, and I commit the end of my life to him (her) by this special prayer, so that by virtue of Your goodness and promise, St. (Name) might be my advocate and provide whatever is needed at that hour. Amen.
.
PROMISE: “When you wish to honor any particular saint and give Me thanks for all the graces I have bestowed on that saint, I increase grace in your soul through the merits of that saint. When you commit the end of your life to any of the saints by special prayers, I appoint those saints to be your advocates and to provide whatever you need at that hour.”-Our Lord to St. Gertrude
.
Blessed Anne Catherine Emmerich revealed in her Visions that saints are particularly powerful on their feast days and should be invoked then.