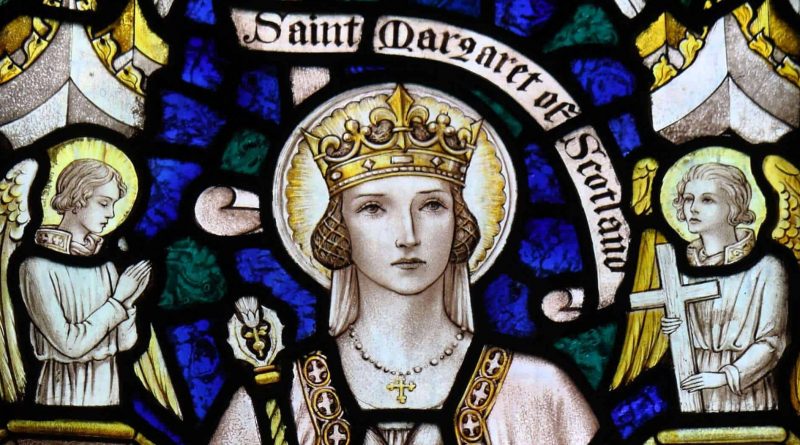 Saint Margaret’s name signifies pearl, a fitting name, says Theodoric, her confessor and her first biographer, for one such as she. Her soul was like a precious pearl; a life spent amidst the luxury of a royal court never dimmed its luster or estranged it from Him who had bought it with His blood. She was the granddaughter of an English king; in 1070 she became the bride of Malcolm of Scotland, thereafter reigning as Queen until her death in 1093.
.
How did she become a Saint in a position where sanctity is so difficult? First, she burned with zeal for the house of God. She built churches and monasteries; she occupied herself by making vestments; she could not rest until she saw the laws of God and His Church observed throughout her realm. Next, amid a thousand cares, she found time to converse with God, ordering her piety with such sweetness and discretion that she won her husband to sanctity like her own. He would rise at night to pray with her; he loved to kiss the holy books she used, and sometimes would take them away with him, bringing them back later to his wife covered with jewels. Lastly, despite Saint Margaret’s great virtue, she wept constantly over her sins and begged her confessor to correct her faults.
.
Saint Margaret did not neglect her duties in the world even if she was not of the world. God blessed this marriage with eight children, six princes and two princesses who did not fail to respond to their mother’s teaching and examples. Never was there a better mother; she spared no pains in their education, and their sanctity was the fruit of her prudence and her zeal. And never was there a better queen. She was the most trusted counselor of her husband, who always found her counsels of great utility, and she labored with him for the spiritual and material improvement of the land. Malcolm, after having pacified his domains for several years, saw to the building of the cathedral of Durham and founded a monastery at Dumfermlin.
.
Living in the midst of all the world’s pleasures, Saint Margaret sighed for the true homeland and viewed death as a release. On her deathbed she learned that her husband and their eldest son had been slain in battle. She thanked God for sending this last affliction as a penance for her sins. After receiving Holy Viaticum, she repeated the prayer from the Missal, O Lord Jesus Christ, who by Thy death didst give life to the world, deliver me. And at the words deliver me, says her biographer, her soul took flight to Christ, in 1093, in her forty-seventh year.
.
Reflection. All perfection consists in keeping a guard upon the heart. Wherever we are, we can make a solitude in our hearts, detach ourselves from the world, and converse familiarly with God, as Saint Margaret did.
.
Prayer to Venerate Any Saint
.
Saint Margaret Queen of Scotland: Feast Day June 10
.
I desire therefore, first of all, that supplications, prayers, intercessions, and thanksgivings be made for all men: For kings, and for all that are in high station: that we may lead a quiet and a peaceable life in all piety and chastity. For this is good and acceptable in the sight of God our Saviour, Who will have all men to be saved, and to come to the knowledge of the truth. (1 Timothy 2:1-4)
.
And another angel came, and stood before the altar, having a golden censer; and there was given to him much incense, that he should offer of the prayers of all saints upon the golden altar, which is before the throne of God. And the smoke of the incense of the prayers of the saints ascended up before God from the hand of the angel. (Rev. 8:3-4)
.
ETERNAL Father, I wish to honor St. (Name), and I give Thee thanks for all the graces Thou have bestowed upon him (her). I ask Thee to please increase grace in my soul through the merits of this saint, and I commit the end of my life to him (her) by this special prayer, so that by virtue of Thy goodness and promise, St. (Name) might be my advocate and provide whatever is needed at that hour. Amen.
.
PROMISE: “When you wish to honor any particular saint and give Me thanks for all the graces I have bestowed on that saint, I increase grace in your soul through the merits of that saint. When you commit the end of your life to any of the saints by special prayers, I appoint those saints to be your advocates and to provide whatever you need at that hour.”-Our Lord to St. Gertrude
.
Blessed Anne Catherine Emmerich revealed in her Visions that saints are particularly powerful on their feast days and should be invoked then