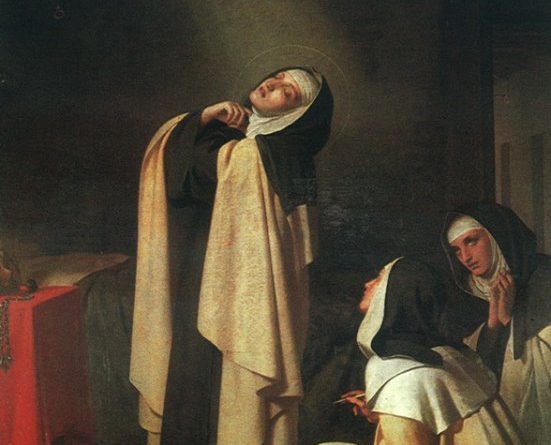 Some time before her death, which took place in 1607, the servant of God, Magdalen de Pazzi, being one evening with several other Religious in the garden of the convent, was ravished in ecstasy, and saw Purgatory open before her. At the same time, as she made known later, a voice invited her to visit all the prisons of Divine Justice, and to see how truly worthy of compassion are the souls detained there.

At this moment she was heard to say, “Yes, I will go.” She consented to undertake this painful journey. In fact, she walked for two hours round the garden, which was very large, pausing from time to time. Each time she interrupted her walk, she contemplated attentively the sufferings which were shown to her. She was then seen to wring her hands in compassion, her face became pale, her body bent under the weight of suffering, in presence of the terrible spectacle with which she was confronted.

She began to cry aloud in lamentation, “Mercy, my God, mercy! Descend, O Precious Blood, and deliver these souls from their prison. Poor souls! you suffer so cruelly, and yet you are content and cheerful. The dungeons of the martyrs in comparison with these were gardens of delight. Nevertheless there are others still deeper. How happy should I esteem myself were I not obliged to go down into them.”

She did descend, however, for she was forced to continue her way. But when she had taken a few steps, she stopped terror-stricken, and, sighing deeply, she cried, “What! Religious also in this dismal abode! Good God ! how they are tormented! Ah, Lord!” She does not explain the nature of their sufferings; but the horror which she manifested in contemplating them caused her to sigh at each step. She passed from thence into less gloomy places. They were the dungeons of simple souls, and of children in whom ignorance and lack of reason extenuated many faults. Their torments appeared to her much more endurable than those of the others. Nothing but ice and fire were there. She noticed that these souls had their angel-guardians with them, who fortified them greatly by their presence; but she saw also demons whose dreadful forms increased their sufferings.

Advancing a few paces, she saw souls still more unfortunate, and she was heard to cry out, “Oh! how horrible is this place; it is full of hideous demons and incredible torments! Who, O my God, are the victims of these cruel tortures? Alas! they are being pierced with sharp swords, they are being cut into pieces.” She was answered that they were the souls whose conduct had been tainted with hypocrisy.

Advancing a little, she saw a great multitude of souls which were bruised, as it were, and crushed under a press; and she understood that they were those souls which had been addicted to impatience and disobedience during life. Whilst contemplating them, her looks, her sighs, her whole attitude betokened compassion and terror.

A moment later her agitation increased, and she uttered a dreadful cry. It was the dungeon of lies which now lay open before her. After having attentively considered it, she cried aloud, “Liars are confined in a place in the vicinity of Hell, and their sufferings are exceedingly great. Molten lead is poured into their mouths; I see them burn, and at the same time tremble with cold.”

She then went to the prison of those souls which had sinned through weakness, and she was heard to exclaim, “Alas! I had thought to find you among those who have sinned through ignorance, but I am mistaken; you burn with an intenser fire.“

Farther on, she perceived souls which had been too much attached to the goods of this world, and had sinned by avarice.

“What blindness,” said she, “thus eagerly to seek a perish able fortune! Those whom formerly riches could not sufficiently satiate, are here gorged with torments. They are smelted like metal in the furnace.”

From thence she passed into the place where those souls were imprisoned which had formerly been stained with impurity. She saw them in so filthy and pestilential a dungeon that the sight produced nausea. She turned away quickly from that loathsome spectacle. Seeing the ambitious and the proud, she said, “Behold those who wished to shine before men; now they are condemned to live in this frightful obscurity.”

Then she was shown those souls which had been guilty of ingratitude towards God. They were a prey to unutterable torments, and, as it were, drowned in a lake of molten lead, for having by their ingratitude dried up the source of piety.

Finally, in a last dungeon, she was shown souls that had not been given to any particular vice, but which, through lack of proper vigilance over themselves, had committed all kinds of trivial faults. She remarked that these souls had share in the chastisements of all vices, in a moderate degree, because those faults committed only from time to time rendered them less guilty than those committed through habit.

After this last station the saint left the garden, begging God never again to make her witness of so heartrending a spectacle: she felt that she had not strength to endure it. Her ecstasy still continued, and, conversing with Jesus, she said to Him, “Tell me, Lord, what was your design in discovering to me those terrible prisons, of which I knew so little, and comprehended still less? Ah ! I now see; you wished to give me the knowledge of your infinite sanctity, and to make me detest more and more the least stain of sin, which is so abominable in your eyes.”