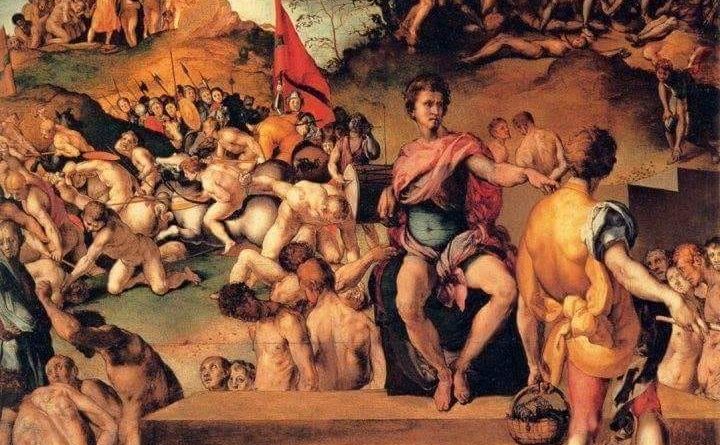 Patronage: against cramps; alpine troops; Appenzell Innerrhoden; armies; armorers;Burgundians; Carolingian dynasty; Austria; clothmakers; cramps; dyers; gout;House of Savoy; infantrymen; Lombards; Merovingians; Piedmont, Italy; Pontifical Swiss Guards; Saint-Maurice-en-Valais; St. Moritz Sardinia; soldiers; Stadtsulza, Germany; swordsmiths; weavers; Holy Roman Emperors
.
The Roman legion of Christians, called the Theban Legion, under the presidency of their General, Maurice, numbered more than six thousand men. They marched from the East into Gaul, which was in revolt. They were camped near the Lake of Geneva, when they received orders to join with the others in a solemn sacrifice to the gods. They retired a little farther away, to a site today called Saint Maurice d’Augaune, in order to abstain, but were told to return and join in the festival with the others. They found themselves in the sad necessity of disobeying the command. It was not an act of felony for these brave soldiers, who had already fought many battles, but of heroic loyalty. Nonetheless, the barbaric prince gave the order to decimate the Legion. It would seem the emperor’s messengers might have feared a forced resistance, but the disciples of Jesus Christ hoped for nothing but a peaceful victory over the world and the demon, with all his false gods.
.
The names of the soldiers were written on papers and placed in the caps of the centurions, for 600 were destined to perish as examples. These embraced their comrades, who encouraged them and even envied their fate. The plain soon flowed with the blood of the martyrs. The survivors persisted in declaring themselves Christians, and the butchery began again; the blood of another 600 reddened the waters of the Rhone. The others all persevered in their faith, and Saint Maurice sent to the tyrant an admirable letter, saying: Emperor, we are your soldiers; we are ready to combat the enemies of the empire, but we are also Christians, and we owe fidelity to the true God. We are not rebels, but we prefer to die, innocent, rather than to live, guilty. The Emperor, seeing himself defeated, ordered them all to be massacred. As the massacre began, these generous soldiers deposed their weapons, offered their necks to the sword, and suffered themselves to be butchered in silence.
.
Reflection: Thank God for every slight or insult you have to bear. An injury borne in meekness and silence is a true victory. It is the proof that we are good soldiers of Jesus Christ, disciples of that heavenly wisdom which is both pure and peaceable.
.
Prayer to Venerate Any Saint
.
Saint Maurice: Feast Day September 22
.
I desire therefore, first of all, that supplications, prayers, intercessions, and thanksgivings be made for all men: For kings, and for all that are in high station: that we may lead a quiet and a peaceable life in all piety and chastity. For this is good and acceptable in the sight of God our Saviour, Who will have all men to be saved, and to come to the knowledge of the truth.
(1 Timothy 2:1-4)
.
And another angel came, and stood before the altar, having a golden censer; and there was given to him much incense, that he should offer of the prayers of all saints upon the golden altar, which is before the throne of God. And the smoke of the incense of the prayers of the saints ascended up before God from the hand of the angel.
(Rev. 8:3-4)
.
ETERNAL Father, I wish to honor St. (Name), and I give Thee thanks for all the graces Thou has bestowed upon him (her). I ask Thee to please increase grace in my soul through the merits of this saint, and I commit the end of my life to him (her) by this special prayer, so that by virtue of Thy goodness and promise, St. (Name) might be my advocate and provide whatever is needed at that hour. Amen.
.
PROMISE: “When you wish to honor any particular saint and give Me thanks for all the graces I have bestowed on that saint, I increase grace in your soul through the merits of that saint. When you commit the end of your life to any of the saints by special prayers, I appoint those saints to be your advocates and to provide whatever you need at that hour.”-Our Lord to St. Gertrude
.
Blessed Anne Catherine Emmerich revealed in her Visions that saints are particularly powerful on their feast days and should be invoked then.