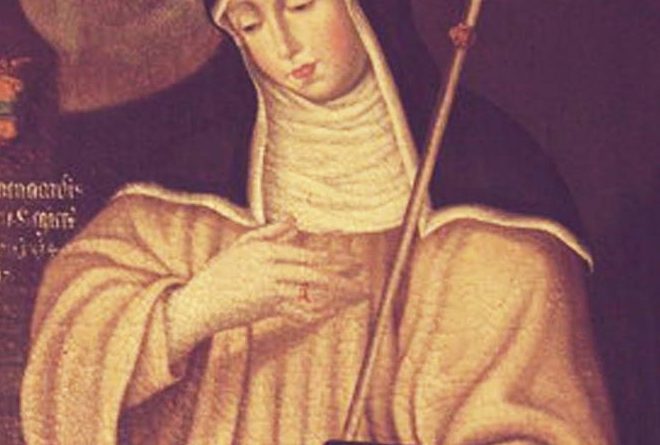 Patronage: against blindess
.
Saint Mechtildis, born in 1240 in Saxony, was the younger sister of the illustrious Abbess Gertrude of Hackeborn. She was so attracted to religious life at the age of seven, after a visit to her sister in the monastery of Rodardsdoft, that she begged to be allowed to enter the monastic school there. Her gifts caused her to make great progress both in virtue and learning.
.
Ten years later, when her sister had transferred the monastery to an estate at Helfta offered by their brothers, Mechtildis went with her. She was already distinguished for her virtues, and while still very young became the valuable Assistant to Abbess Gertrude. One of the children who in the monastic school were committed to her care, was the child of five who later became known as Saint Gertrude the Great.
.
Saint Mechtildis was gifted with a beautiful voice, and was choir mistress of the nuns all her life. Divine praise, it has been said, was the keynote of her life, as also of her famous book, The Book of Special Grace. When she learned, at the age of fifty, that two of her nuns had written down all the favors and words of their Abbess, which she had become, she was troubled, but Our Lord in a vision assured her that all this has been committed to writing by My will and inspiration, and therefore you have no cause to be troubled over it. He added that the diffusion of the revelations He had given her would cause many to increase in His love. She immediately accepted the Lord’s bidding, and the book became extremely popular in Italy after her death. Its influence on the poet Dante’s Purgatorio is undeniable, for she had described the place of purification after death under the same figure of a seven-terraced mountain. The Donna Matelda of his Purgatorio, who guides him at one point in his vision, is Saint Mechtildis as she represents mystical theology. She died in 1298 at the monastery of Helfta.
.
Prayer to Venerate Any Saint
.
Saint Mechtilde: Feast Day February 26
.
Rev. 8:3-4 [3] And another angel came, and stood before the altar, having a golden censer; and there was given to him much incense, that he should offer of the prayers of all saints upon the golden altar, which is before the throne of God. [4] And the smoke of the incense of the prayers of the saints ascended up before God from the hand of the angel.
.
ETERNAL Father, I wish to honor St. (Name), and I give You thanks for all the graces You have bestowed upon him (her). I ask You to please increase grace in my soul through the merits of this saint, and I commit the end of my life to him (her) by this special prayer, so that by virtue of Your goodness and promise, St. (Name) might be my advocate and provide whatever is needed at that hour. Amen.
.
PROMISE: “When you wish to honor any particular saint and give Me thanks for all the graces I have bestowed on that saint, I increase grace in your soul through the merits of that saint. When you commit the end of your life to any of the saints by special prayers, I appoint those saints to be your advocates and to provide whatever you need at that hour.”-Our Lord to St. Gertrude
.
Blessed Anne Catherine Emmerich revealed in her Visions that saints are particularly powerful on their feast days and should be invoked then.