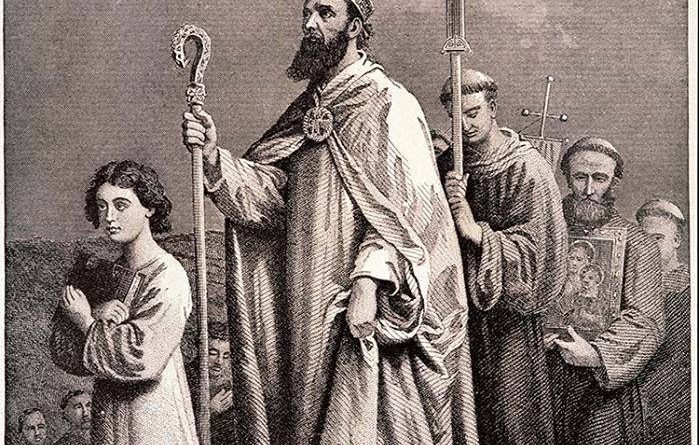 In Patrick’s time there lived in the country of the Ulaid folk a certain man named Maccuil-maccu-Greccse [Macuil Maccugreccae]; and this man was such a very ungodly, savage tyrant, that he was called “Cyclops.” He was depraved in his thoughts, violent in his words, malicious in his deeds, bitter in spirit, wrathful in disposition, villainous in body, cruel in mind, heathenish in life, monstrous in conscience, inclining to such a depth of ungodliness, that one day he acted as follows.
.
There is a mountainous place, rugged and steep, in Druimm-maccu-Echaid Druim Mocceuchach, where he daily practiced his tyranny, showing the vilest signs of cruelty, and slaying in cruel fashion strangers that passed by.
.
Now, one day, when he was sitting at this place, he saw St. Patrick radiating with the clear light of faith, and resplendent with a certain wonderful diadem of heavenly glory; he saw him, I say, walking, with unshaken confidence of doctrine, on a road agreeable thereto.
.
And he thought to slay him, and said to his followers, “Lo, here comes that deceiver and perverter of mankind, whose wont it is to do juggling tricks, that he may deceive and beguile many. Let us now go and test him, and we shall know if that God of whom he makes boast has any power.”
.
And so they tested the holy man in the following way: They placed one of their own number, who was in good health, in their midst covered with a blanket, feigning to be sick unto death, that they might test the Saint by a trick of this kind, calling the holy man a deceiver, his miracles jugglery, and his prayers charms and incantations.
.
When St. Patrick with his disciples came up, the heathen folk said to him, “Lo, one of us is now sick; come then, and chant over him some of the spells of thy religion, if perchance he may be healed.” St. Patrick, however, knowing all their deceits and tricks, said boldly and fearlessly, “It is no wonder he is sick.” And when his companions uncovered the face of the man who was feigning sickness, they perceived that he was already dead. And they, confounded and wondering at such a miracle, said one to another with groans, “Truly this is a man of God. We have done ill in testing him.”
.
But St. Patrick, turning to Maccuil, said, “Wherefore didst thou wish to test me?” That cruel tyrant answered and said, I am sorry for having done this; and I shall do whatsoever thou biddest me; and I hand myself over now into the power of thy most high God whom thou preachest.”
.
And the Saint said, “Believe then in my God, the Lord Jesus, and confess thy sins and be baptized in the name of the Father and of the Son and of the Holy Ghost.” And he was converted in that hour, and believed in the everlasting God. Moreover he was baptized.
.
And Maccuil proceeded to say, “I confess to thee, my holy lord Patrick, that I purposed to slay thee. Give sentence therefore what punishment is due for a crime so great and of such a nature.” And Patrick said, “I cannot judge; but God will judge. Nevertheless, do thou now go forth unarmed to the sea, and depart quickly from this Irish land, taking nothing with thee of thy property save a cheap and small garment to cover thy body. Eat and drink nothing of the produce of this island; bear a mark of thy sin on thy head; and after thou hast reached the sea, lock thy feet together with an iron fetter, and throw the key of it into the sea. Place thyself in a boat made of a single hide, without either rudder or oars, and be ready to go whithersoever the wind and the waves may lead thee; and whatsoever land Divine Providence may bear thee to, dwell in it, and there practice obedience to the commandments of God.”
.
And Maccuil said, “I shall do as thou hast said. But what shall we do about the dead man?” And Patrick said, “He will live and rise again without pain. So Patrick raised him up in that same hour, and he lived again in good health.”
.
And Maccuil departed thence as quickly as possible to the sea that is south of the Plain of Inis [Magh Inis], possessing the unshaken confidence of faith. And he locked himself to- gether on the shore, and threw the key into the sea, as he had been instructed; and he put to sea in a little boat; and the north wind blew on him, and bore him southwards, and cast him on an island named Evonia the Isle of Man.
.
And there he found two men, very admirable, resplendent in faith and learning, who were the first to teach the word of God and baptism in Evonia. And the inhabitants of that island were, through their teaching, converted to the Catholic faith. Their names are Conindri and Rumili.
.
Now they, when they beheld a man dressed in only one garment, were amazed, and had pity on him, and drew him out of the sea, and received him with joy. He then, in a country allotted to him by God, where he found spiritual fathers, practiced both his body and soul in their rule; and passed the whole time of his life with those two holy bishops, until he was made their successor in the episcopate. By the Lords Mercy the same once-evil man became a great penitent, a bishop eminent in holiness and miracles, and became known as “St. Machaldus.”