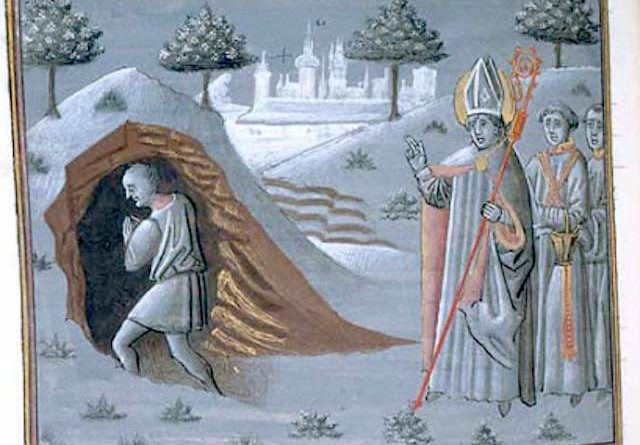 By far the most famous of medieval gateways of hell was St. Patrick’s Purgatory on Station Island in Lough Derg, County Donegal, Ireland.
.
Many of Saint Patrick’s potential converts doubted the reality of hell, and asked for substantiation of his claims. A discouraged Patrick prayed that God would help him show the people the reality of heaven and hell. God revealed to Patrick a pit in the ground, which led to a cave in which a fire was ever burning. By witnessing Patrick’s purgatory, the reality of heaven, hell and purgatory were made real to these pagans.
.
Pilgrims came, with a view to anticipating in this life the expiatory pangs of Purgatory, and from it many returned with all their evil tendencies burnt away. The island became in course of time dotted with the huts put up to shelter the pilgrims who came to perform this penance, and the story of the wonderful physical and spiritual cures effected by the influence of St. Patrick spread far and wide, inspiring the Spanish poet Calderon with the religious drama known as ‘El Purgatorio de San Patricio.’
.
The Purgatory is alluded to in the old office which used to be recited in Ireland on March 17, the fete day of the Saint, and there are references to it in many fifteenth and sixteenth century breviaries. As late as the seventeenth century traces remained of the buildings erected near the cave, and the Abbot of a monastery on the Isle of Dearg was called the Prior of the Purgatory of St. Patrick. A painting by Giuseppe Passeri, a little-known master of the same period, represents an angel kneeling beside St. Patrick and holding a scroll on which is a quaint drawing of a well, the rim of which is encircled with flames.
.
Around 1130 the monastery was given to Augustinian Canons Regular by the authority of the cathedral in Armagh, under Saint Malachy. The monastery on Saints Island offered hospitality to pilgrims, who would visit in a spirit of penance and prayer. It also served as a place where pilgrims could prepare themselves for visiting the Purgatory. Documents report that pilgrims who did want to visit the Purgatory would arrive with letters of permission from a bishop, either from their own region or from Armagh. They would then spend fifteen days fasting and praying to prepare themselves for the visit to Station Island, a short boat ride away. At the end of the fifteen days, pilgrims would confess their sins, receive communion and undergo a few final rituals before being locked in the cave for twenty-four hours. The next morning the prior would open the door, and if the pilgrim were found alive, he would be brought back to Saints Island for another fifteen days of prayer and fasting.