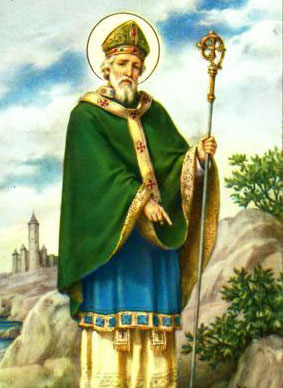 Once the Saint had a great vision, in which the actual state and the future of the Church in Ireland were revealed to him. In the first place, he saw the whole land, as it were, like a great furnace whose flames reached to the sky. And he clearly heard the voice of an Angel saying, “Such is now – the state of Ireland in the sight of the Lord.”
.
After a little time, instead of this far-spreading universal fire, he saw flamingmountains here and there over the land, then torches shining, succeeded by glimmering lights amidst an ever-increasing darkness. Last of all, he saw a few live coals buried and burning deep in the earth. Then an angelic voice was heard, saying that such should be the successive states of the Irish people in times that were coming.
.
Then, with tears rolling down his cheeks, the Saint repeated many times those words of the Psalmist, “Will God then cast us off forever ? Or will He never more be favorable again? Or will He cut off His mercy forever from generation to generation? Or will God forget to show mercy? Or will He in anger close off His mercies?”
.
The Angel answered and told him to look to the north of the land, and that there he should see the Hand of the Most High. The Saint lifted up his eyes, and, behold, a little light arose in Uladh (Ulster), which had struggled long in the darkness, until at length the whole island was filled with the brightness of its glory, and Ireland returned to its first state of all-pervading fire. (From The Life of Saint Patrick, Apostle of Ireland)