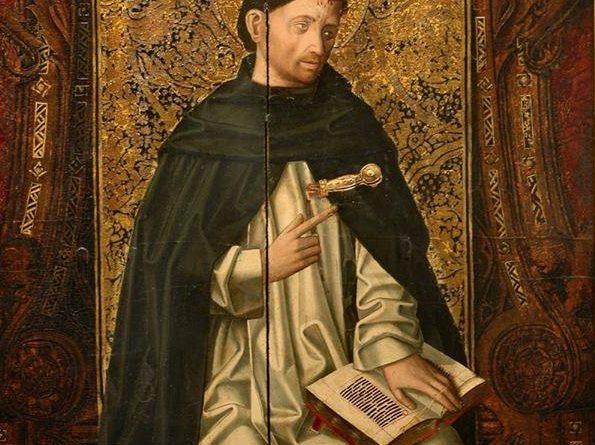 Patronage: inquisitors, midwives, Castelleone di Suasa, Italy, Verona, Italy, diocese of Guaynabo, Puerto Rico
.
In 1205 the glorious martyr Peter was born at Verona of Manichean parents; there he nonetheless attended a Catholic school. One day his Manichean uncle asked what he learnt there. The Creed, answered Peter: I believe in God, Creator of heaven and earth. No arguments could shake his faith, and at the age of sixteen he received the habit from Saint Dominic himself at Bologna.
.
After his ordination, he preached to the heretics of Lombardy and converted multitudes. Saint Peter was constantly obliged to dispute with heretics, and although he was able to confound them, still the devil took occasion thereby to tempt him one day against faith. Instantly he had recourse to prayer before an image of Our Lady, and heard a voice saying to him the words of Jesus Christ in the Gospel, I have prayed for thee, Peter, that thy faith may not fail; and thou shalt confirm thy brethren in it. (Luke22:32)
.
He often conversed with the Saints, and one day the martyred virgins Catherine, Agnes and Cecilia appeared to him and conferred with him. A passing religious, hearing their feminine voices, accused him to their Superior, who without hesitation or questions, exiled him to a convent where no preaching was being done. Saint Peter submitted humbly, but complained in prayer to Jesus crucified that He was abandoning him to his bad reputation. The crucifix spoke: And I, Peter, was I too not innocent? Learn from Me to suffer the greatest sorrows with joy. Eventually his innocence was brought to light; for his part, he had learned in his solitude to love humiliation and confusion.
.
Again engaged in preaching, miracles accompanied his exhortations. He traveled all over Italy and became famous. Once when preaching to a vast crowd under the burning sun, the heretics defied him to procure shade. He prayed, and a cloud overshadowed the audience.
.
Every day at the elevation of the Mass he prayed, Grant, Lord, that I may die for Thee, who for me didst die. His prayer was answered. His enemies, confounded by him, sought his life. Two of them attacked him in 1252 on the road to Milan and struck his head with an axe. Saint Peter fell, commended himself to God, dipped his finger in his own blood, and wrote on the ground, I believe in God, Creator of heaven and earth. He was then stabbed to death. The brother religious accompanying him also suffered death. The details of the crime were made known by Saint Peter’s murderer, named Carino, who after fleeing from justice confessed his crime, asking for a penance from the Dominican Fathers. He took the habit, and according to their testimony lived the life of a saint and persevered to the end. Miracles at Saint Peter’s tomb and elsewhere converted a great many heretics.
.
Reflection. From his boyhood Saint Peter boldly professed his faith among heretics. He spent his life in preaching the Faith to them and received the glorious and long-desired crown of martyrdom at their hands. Are we, too, courageous, firm, zealous, full of prayer for their conversion, and unflinching in our profession of faith?
.
Prayer to Venerate Any Saint
.
Saint Peter of Verona: Feast Day April 29
.
I desire therefore, first of all, that supplications, prayers, intercessions, and thanksgivings be made for all men: For kings, and for all that are in high station: that we may lead a quiet and a peaceable life in all piety and chastity. For this is good and acceptable in the sight of God our Saviour, Who will have all men to be saved, and to come to the knowledge of the truth. (1 Timothy 2:1-4)
.
And another angel came, and stood before the altar, having a golden censer; and there was given to him much incense, that he should offer of the prayers of all saints upon the golden altar, which is before the throne of God. And the smoke of the incense of the prayers of the saints ascended up before God from the hand of the angel. (Rev. 8:3-4)
.
ETERNAL Father, I wish to honor St. (Name), and I give You thanks for all the graces You have bestowed upon him (her). I ask You to please increase grace in my soul through the merits of this saint, and I commit the end of my life to him (her) by this special prayer, so that by virtue of Your goodness and promise, St. (Name) might be my advocate and provide whatever is needed at that hour. Amen.
.
PROMISE: “When you wish to honor any particular saint and give Me thanks for all the graces I have bestowed on that saint, I increase grace in your soul through the merits of that saint. When you commit the end of your life to any of the saints by special prayers, I appoint those saints to be your advocates and to provide whatever you need at that hour.”-Our Lord to St. Gertrude
.
Blessed Anne Catherine Emmerich revealed in her Visions that saints are particularly powerful on their feast days and should be invoked then.