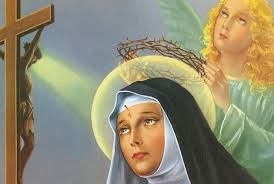 Patronage: abuse victims, against infertility, against loneliness, against sickness, against sterility, against wounds, bodily ills, Cascia, Italy, Dalayap, Philippines, desperate causes, difficult marriages, forgotten causes, Igbaras, Iloilo, Philippines, impossible causes, lost causes, parenthood, sick people, sterile people, victims of physical spouse abuse, widows, wounded people
.
Saint Rita was born in Italy in the late 14th century, near the little city of Cascia, of parents who though advancing in age had no children; she was the fruit of their pious prayers. At the age of twelve she resolved to consecrate herself to God by the vow of chastity, but her parents required her to marry. She obeyed; and God, who perhaps wished her to serve as an example for those having to bear with violent spouses, permitted that she be joined to a man of ferocious character, who terrified the region where he lived.
.
During eighteen years she succeeded so well in pacifying him that he eventually even became submissive to the laws of God. Nonetheless, his enemies killed him; and then the pious widow had to overcome her twin sons’ desire for vengeance. Again she succeeded. When the two young men died not long afterwards, she was without any further bonds to keep her in the world, and she made application to a convent of Augustinian nuns at Cascia. Never had a widow been admitted there, but Saint John the Baptist, with Saint Augustine and Saint Nicholas, who had died during the 13th century in the nearby town of Tolentino, appeared to her to answer her fervent prayers. They transported her miraculously into the convent by night, despite all the locked doors. The Sisters, finding her there in the morning, could not refuse her request any longer.
.
Saint Rita practiced severe mortifications, eating but once a day and taking only bread and water for food. She was a model of perfect obedience; she meditated every night, from midnight until dawn, on the Passion of Our Lord, and begged to share His sufferings. On one of these nights she felt in her forehead the pain of sharp thorns, which made there an incurable wound. The festering wound isolated her from the other Sisters, and she lived thereafter almost as a hermit in the convent. The wound was cured once for a short time, when the entire group of Sisters were to go to Rome on the occasion of a universal jubilee; on their return her wound opened again.
.
It was discovered that Saint Rita had the gift of miracles when a young girl was cured during her mother’s visit to the convent, to beg the Saint’s prayers for that intention. Soon many visitors were coming even from distant regions to ask her charity. She expired peacefully in May of 1456. The wound of her forehead, until then very ugly, became brilliant at the moment of her death. The shrine of Saint Rita is still a favorite pilgrimage site in Italy.
.
Prayer to Venerate Any Saint
.
Saint Rita: Feast Day May 22
.
I desire therefore, first of all, that supplications, prayers, intercessions, and thanksgivings be made for all men: For kings, and for all that are in high station: that we may lead a quiet and a peaceable life in all piety and chastity. For this is good and acceptable in the sight of God our Saviour, Who will have all men to be saved, and to come to the knowledge of the truth. (1 Timothy 2:1-4)
.
And another angel came, and stood before the altar, having a golden censer; and there was given to him much incense, that he should offer of the prayers of all saints upon the golden altar, which is before the throne of God. And the smoke of the incense of the prayers of the saints ascended up before God from the hand of the angel. (Rev. 8:3-4)
.
ETERNAL Father, I wish to honor St. (Name), and I give Thee thanks for all the graces Thou have bestowed upon him (her). I ask Thee to please increase grace in my soul through the merits of this saint, and I commit the end of my life to him (her) by this special prayer, so that by virtue of Thine goodness and promise, St. (Name) might be my advocate and provide whatever is needed at that hour. Amen.
.
PROMISE: “When you wish to honor any particular saint and give Me thanks for all the graces I have bestowed on that saint, I increase grace in your soul through the merits of that saint. When you commit the end of your life to any of the saints by special prayers, I appoint those saints to be your advocates and to provide whatever you need at that hour.”-Our Lord to St. Gertrude
.
Blessed Anne Catherine Emmerich revealed in her Visions that saints are particularly powerful on their feast days and should be invoked then