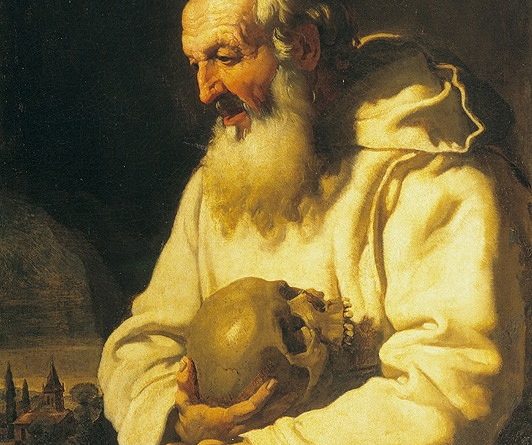 Patronage: Suwalki, Poland
.
In the tenth century Sergius, a nobleman of Ravenna, quarreled with a relative over an estate and, in a duel to which his son Romuald was witness, slew him. The young man of twenty years was horrified at his father’s crime, and entered a Benedictine monastery at Classe to do a forty days’ penance for him. This penance led to his entry into religion as a Benedictine monk.
.
After seven years at Classe, Romuald went to live as a hermit near Venice, under the guidance of a holy man who had him recite the Psalter from memory every day. When he stumbled, the hermit struck his left ear with a rod. Romuald suffered with patience, but one day, noting that he was losing his hearing in that ear, asked the old man to strike him on his right ear. This episode supposes great progress in virtue. The two religious were joined by Peter Urseolus, Duke of Venice, who desired to do penance also, and together they led a most austere life in the midst of assaults from the evil spirits.
.
Saint Romuald, whose aim was to restore the primitive rule to the Order of Saint Benedict, succeeded in founding some hundred monasteries in both Italy and France, and he filled the solitudes with hermitages. The principal monastery was that at Camaldoli, a wild, deserted region, where he built a church, surrounded by a number of separate cells for the solitaries who lived under his rule; his disciples were thus called Camaldolese. For five years the fervent founder was tormented by furious attacks by the demon. He repulsed him, saying, O enemy! Driven out of heaven, you come to the desert? Depart, ugly serpent, already you have what is due you. And the shamed adversary would leave him. Saint Romuald’s father, Sergius, was moved by the examples of his son, and entered religion near Ravenna; there he, too, was attacked by hell and thought of abandoning his design. Romuald went to visit him; he showed him the error of the devil’s ruses, and his father died in the monastery, in the odor of sanctity.
.
Among his first disciples were Saints Adalbert and Boniface, apostles of Russia, and Saints John and Benedict of Poland, martyrs for the faith. He was an intimate friend of the Emperor Saint Henry, and was reverenced and consulted by many great men of his time. He once passed seven years in solitude and total silence. He died, as he had foretold twenty years in advance, alone in his monastery of Val Castro, on the 19th of June, 1027, in an advanced and abundantly fruitful old age.
.
By the life of Saint Romuald, we see how God brings good out of evil. In his youth Saint Romuald was much troubled by temptations of the flesh; to escape them he had recourse to hunting, and it was in the woods that he first conceived his love for solitude. His father’s sin prompted him to undertake a forty days’ penance in the monastery, which he then made his permanent home. Some bad examples of his fellow-monks induced him to leave them and adopt the solitary mode of life; the repentance of a Venetian Duke brought him his first disciple. The temptations of the devil compelled him to lead his severe life of expiation; and finally, the persecutions of others were the occasion of his settlement at Camaldoli, mother house of his Order.
.
Reflection. If we follow the impulses of the Holy Spirit, like Saint Romuald we shall bring Him into situations which seem without hope. Our own sins, the sins of others, their ill will against us, our own mistakes and misfortunes, if we react with the help of God, are capable of bringing our own souls and others to the throne of God’s mercy and love.
Prayer to Venerate Any Saint
.
Saint Romuald: Feast Day February 7
.
Rev. 8:3-4 [3] And another angel came, and stood before the altar, having a golden censer; and there was given to him much incense, that he should offer of the prayers of all saints upon the golden altar, which is before the throne of God. [4] And the smoke of the incense of the prayers of the saints ascended up before God from the hand of the angel.
.
ETERNAL Father, I wish to honor St. (Name), and I give You thanks for all the graces You have bestowed upon him (her). I ask You to please increase grace in my soul through the merits of this saint, and I commit the end of my life to him (her) by this special prayer, so that by virtue of Your goodness and promise, St. (Name) might be my advocate and provide whatever is needed at that hour. Amen.
.
PROMISE: “When you wish to honor any particular saint and give Me thanks for all the graces I have bestowed on that saint, I increase grace in your soul through the merits of that saint. When you commit the end of your life to any of the saints by special prayers, I appoint those saints to be your advocates and to provide whatever you need at that hour.”-Our Lord to St. Gertrude
.
Blessed Anne Catherine Emmerich revealed in her Visions that saints are particularly powerful on their feast days and should be invoked then.