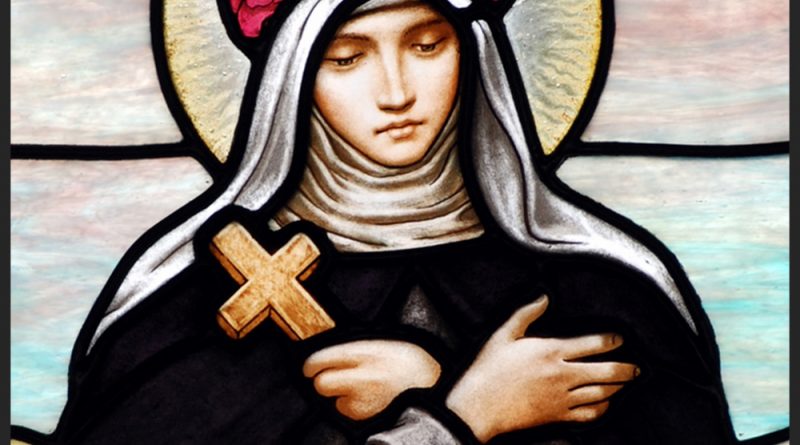 Patronage: embroiderers; gardeners; florists;India; Latin America; people ridiculed or misunderstood for their piety; for the resolution of family quarrels;indigenous peoples of the Americas;Peru; Philippines; Villareal; Santa Rosa, California; Santa Rosa, Laguna; against vanity; Lima; Peruvian Police Force
This lovely flower of sanctity, the first canonized Saint of the New World, was born at Lima, Peru, in 1586. She was christened Isabel, but the beauty of her infant face earned for her the title of Rose, which she thereafter bore. As a child still in the cradle, her silence during a painful surgical operation seemed to foretell the thirst for suffering which would consume her heart.
At an early age she engaged herself as a servant to support her impoverished parents, then worked day and night. In spite of hardships and austerities her beauty ripened with increasing age, and she was openly much admired. Fearing vanity would enter her heart, she cut off her hair, blistered her face with pepper and her hands with lime. She never left the interior of her parents’ house in Canta, for four years, not even to walk in an inviting garden just beyond its walls. She finally obtained her parents’ permission to be enrolled in the Third Order of Saint Dominic; from her childhood she had taken Saint Catherine of Siena as her model, and she then redoubled her penance. The Blessed Sacrament seemed virtually her only food. Her love for it was intense. Her fasting was near miraculous; during Lent in particular, she denied herself her former single piece of bread each day, to consume only a few orange seeds. Her disciplines were of an almost incredible severity, and her hair shirt reached from her shoulders to her wrists and knees; not satisfied with its rudeness, she armed it with iron nails.
The cell of Saint Rose was a garden hut, her couch a box of broken tiles. Concealed by her veil, a silver crown armed with ninety sharp points encircled her head. More than once, when she shuddered at the prospect of a night of torture, a voice said, My cross was yet more painful. The demon tormented her for fifteen years with insupportable temptations; but God sustained His spouse against them, though she would gladly have died rather than live any longer in their clutches. When a Dutch fleet prepared to attack the city of Lima, Rose took her place before the tabernacle, and wept because she felt unworthy to die in its defense, as she hoped she might; the enemy weighed anchor soon afterwards and departed without attempting a siege. All of Saint Rose’s sufferings were offered for the conversion of sinners, and the thought of the multitudes in hell was ever before her soul. She died in 1617, at the age of thirty-one.
Reflection: Rose, pure as driven snow, was filled with deepest contrition and humility, and did constant and terrible penance. Our sins are continual, our repentance passing, our contrition slight, our penance nothing. How will it fare with us?
Prayer to Venerate Any Saint
Saint Rose of Lima: Feast Day August 30
I desire therefore, first of all, that supplications, prayers, intercessions, and thanksgivings be made for all men: For kings, and for all that are in high station: that we may lead a quiet and a peaceable life in all piety and chastity. For this is good and acceptable in the sight of God our Saviour, Who will have all men to be saved, and to come to the knowledge of the truth. (1 Timothy 2:1-4)
And another angel came, and stood before the altar, having a golden censer; and there was given to him much incense, that he should offer of the prayers of all saints upon the golden altar, which is before the throne of God. And the smoke of the incense of the prayers of the saints ascended up before God from the hand of the angel. (Rev. 8:3-4)
ETERNAL Father, I wish to honor St. (Name), and I give You thanks for all the graces You have bestowed upon him (her). I ask You to please increase grace in my soul through the merits of this saint, and I commit the end of my life to him (her) by this special prayer, so that by virtue of Your goodness and promise, St. (Name) might be my advocate and provide whatever is needed at that hour. Amen.
PROMISE: “When you wish to honor any particular saint and give Me thanks for all the graces I have bestowed on that saint, I increase grace in your soul through the merits of that saint. When you commit the end of your life to any of the saints by special prayers, I appoint those saints to be your advocates and to provide whatever you need at that hour.”-Our Lord to St. Gertrude
Blessed Anne Catherine Emmerich revealed in her Visions that saints are particularly powerful on their feast days and should be invoked then.