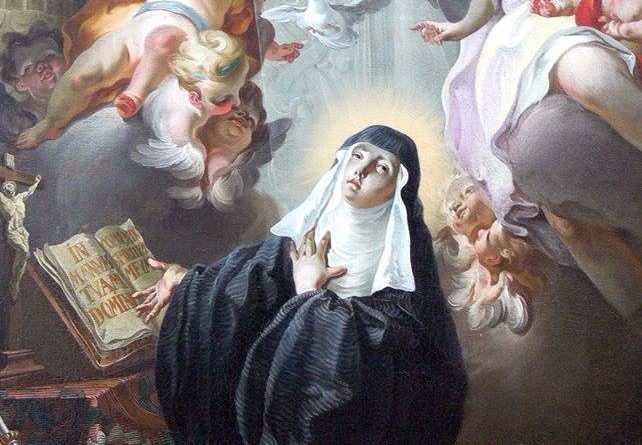 Patronage: against lightning, against rain, against storms, Benedictines, convulsive children, nuns, Le Mans, France, Monte Cassino Abbey
.
Of this Saint but little is known on earth, save that she was the very pious younger sister of the great patriarch Saint Benedict, and that, under his direction, she founded and governed a numerous community near Monte Casino. Saint Gregory sums up her life by saying that she devoted herself to God from her childhood, and that her pure soul rose to God in the likeness of a dove, as if to show that her life had been enriched with the fullest gifts of the Holy Spirit.
.
Her brother was accustomed to visit her once every year, before Lent, and she could not be sated or wearied with the words of grace which flowed from his lips. On his last visit, after a day passed in spiritual conversation, the Saint, knowing that her end was near, said, My brother, leave me not, I pray you, this night, but discourse with me till dawn on the bliss of those who see God in heaven. Saint Benedict would not break his rule for the sake of natural affection, but his sister bowed her head and prayed, and there arose a storm so violent that Saint Benedict could not return to his monastery, and they passed the night as she had prayed, in heavenly conversation.
.
Three days later Saint Benedict saw in a vision the soul of Saint Scholastica going up in the likeness of a dove into heaven. Then he gave thanks to God for the graces He had given her and the glory which had crowned them. When she died, Saint Benedict as well as her spiritual daughters, and the monks sent by their patriarch to her conventual church, mingled their tears and prayed, Alas! alas! dearest mother, to whom dost thou leave us now? Pray for us to Jesus, to whom thou art gone. They then devoutly celebrated holy Mass, commending her soul to God; and her body was borne to Monte Casino, where her brother lay her in the tomb he had prepared for himself. It was written that they all mourned her many days. Finally Saint Benedict said, Weep not, my sisters and brothers; for assuredly Jesus has taken her, before us, to be our aid and defense against all our enemies, that we may remain standing on the evil day and be perfect in all things. Her death occurred in about the year 543.
.
Reflection. Our relatives must be loved in and for God; otherwise the purest affection becomes inordinate and is ill directed, because taken from Him.
.
Prayer to Venerate Any Saint

Saint Scholastica: Feast Day February 10
.
Rev. 8:3-4 [3] And another angel came, and stood before the altar, having a golden censer; and there was given to him much incense, that he should offer of the prayers of all saints upon the golden altar, which is before the throne of God. [4] And the smoke of the incense of the prayers of the saints ascended up before God from the hand of the angel.
.
ETERNAL Father, I wish to honor St. (Name), and I give You thanks for all the graces You have bestowed upon him (her). I ask You to please increase grace in my soul through the merits of this saint, and I commit the end of my life to him (her) by this special prayer, so that by virtue of Your goodness and promise, St. (Name) might be my advocate and provide whatever is needed at that hour. Amen.
.
PROMISE: “When you wish to honor any particular saint and give Me thanks for all the graces I have bestowed on that saint, I increase grace in your soul through the merits of that saint. When you commit the end of your life to any of the saints by special prayers, I appoint those saints to be your advocates and to provide whatever you need at that hour.”-Our Lord to St. Gertrude
.
Blessed Anne Catherine Emmerich revealed in her Visions that saints are particularly powerful on their feast days and should be invoked then.