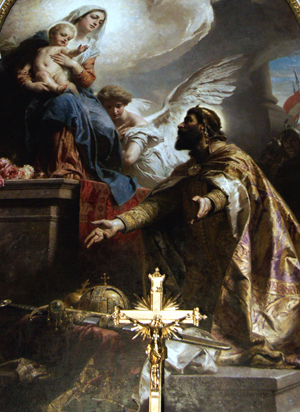 Patronage: Patron saint of Hungary
Patron of kings, masons, stonecutters, stonemasons and bricklayers
Protector against child death
The fourth Duke of the Huns of Hungary, by the name of Geysa, was converted to the Faith and baptized with his wife and several ministers. With the Christian missionaries, he labored to convince his pagan subjects of the divinity of this religion. His wife saw in a vision the protomartyr Saint Stephen, who told her they would have a son who would perfect the work already begun. This son, born in the year 977, was given the name of Stephen.
The little prince was baptized by Saint Adalbert, bishop of Prague, who preached to the Hungarians for a time, and was educated under the care of that bishop and a pious count of Italy.
When he was fifteen years old, his father gave him the commandment of his armies, seeing his virtue and Christian ardor. Already Stephen was beginning to root out idolatry and transform the pagan customs still existing among the people. At twenty years of age, he succeeded his good father, who died in 997. He suppressed a rebellion of his pagan subjects, and founded monasteries and churches all over the land. He sent to Pope Sylvester, begging him to appoint bishops to the eleven sees he had endowed, and to bestow on him, for the greater success of his work, the title of king. The Pope granted his requests, and sent him a cross to be borne before him, saying that he regarded him as the true apostle of his people.
Saint Stephen’s devotion was fervent. He placed his realms under the protection of our Blessed Lady, and kept the feast of Her Assumption with great affection. He established good laws, and saw to their execution. Throughout his life, we are told, he had Christ on his lips, Christ in his heart, and Christ in all he did. His only wars were wars of defense, and in them he was always successful. He married the sister of the Emperor Saint Henry, who was a worthy companion for him. God sent him many grievous trials amid his successes; one by one his children died.
He often went out in disguise to exercise his charities; and one day a troop of beggars, not satisfied with the alms they received, threw him down, tore out handfuls of his hair and beard, and took his purse. He prayed to the Lord and thanked Him for an insult he would not have suffered from enemies, but accepted gladly from the poor who, he said to Him, are called Your own, and for whom I can have only indulgence and tenderness. He bore all reversals with perfect submission to the Will of God.
When Saint Stephen was about to die, he summoned the bishops and nobles, and told them to choose his successor. He urged them to nurture and cherish the Catholic Church, which was still a tender plant in Hungary, to follow justice, humility, and charity, to be obedient to the laws, and to show at all times a reverent submission to the Holy See. Then, raising his eyes towards heaven, he said: O Queen of Heaven, August Restorer of a prostrate world, to Thy care I commend the Holy Church, my people, and my realm, and my own departing soul. It was on his favorite feast day, the Assumption, that he died in peace, in the year 1038.
Prayer to Venerate Any Saint
Saint Stephen of Hungary: Feast Day September 2
I desire therefore, first of all, that supplications, prayers, intercessions, and thanksgivings be made for all men: For kings, and for all that are in high station: that we may lead a quiet and a peaceable life in all piety and chastity. For this is good and acceptable in the sight of God our Saviour, Who will have all men to be saved, and to come to the knowledge of the truth. (1 Timothy 2:1-4)
And another angel came, and stood before the altar, having a golden censer; and there was given to him much incense, that he should offer of the prayers of all saints upon the golden altar, which is before the throne of God. And the smoke of the incense of the prayers of the saints ascended up before God from the hand of the angel. (Rev. 8:3-4)
ETERNAL Father, I wish to honor St. (Name), and I give You thanks for all the graces You have bestowed upon him (her). I ask You to please increase grace in my soul through the merits of this saint, and I commit the end of my life to him (her) by this special prayer, so that by virtue of Your goodness and promise, St. (Name) might be my advocate and provide whatever is needed at that hour. Amen.
PROMISE: “When you wish to honor any particular saint and give Me thanks for all the graces I have bestowed on that saint, I increase grace in your soul through the merits of that saint. When you commit the end of your life to any of the saints by special prayers, I appoint those saints to be your advocates and to provide whatever you need at that hour.”-Our Lord to St. Gertrude
Blessed Anne Catherine Emmerich revealed in her Visions that saints are particularly powerful on their feast days and should be invoked then.