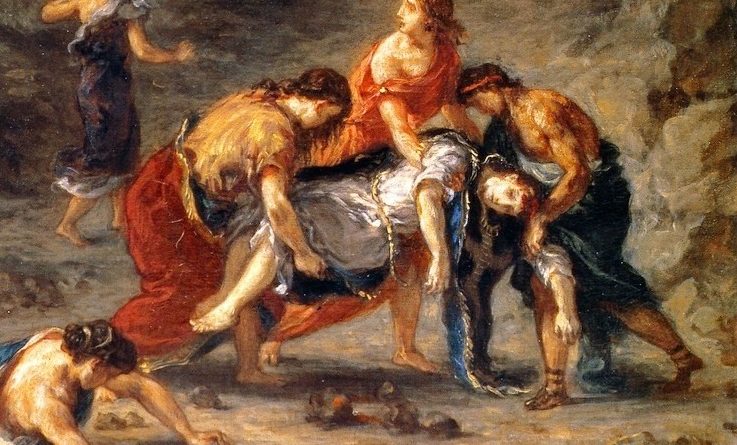 Patronage: Altar Servers;Acoma Indian Pueblo; casket makers; Cetona, Italy;deacons; headaches; horses; Kessel, Belgium; masons; Owensboro, Kentucky; Passau, Germany; Serbia; Republic of Srpska; Prato, Italy
.
The Jewish origin of Saint Stephen is universally acknowledged; he is known and loved everywhere as the first follower of Christ to give to his martyred God love for love, blood for blood. It is not certain whether he was among the seventy-two disciples of Jesus; some believe he was of the Greek tongue and not a native of Palestine. He studied with Saint Paul and Saint Barnabas under the famous Doctor of the Law, Gamaliel, who, being a member of the Sanhedrin, attempted to stop the persecution of the Apostles. (Acts of the Apostles 5:34-40) What is certain, however, is that he distinguished himself among his brethren as an admirable Christian, replete with the gifts of the Holy Spirit. To his great beauty and angelic chastity were joined humility, patience, gentleness and charity, so perfect that they drew from all the faithful great admiration and esteem for him.
.
He was head of the seven disciples whom the Apostles named as deacons, to execute the works of charity which their mandate to preach did not permit them to carry out. Stephen manifested all the qualities one could wish for in a minister of charity and of the Gospel. He knew Scripture to perfection and was steeped in its divine spirit; he was endowed with invincible force because he feared nothing in the service of God. Everywhere in Jerusalem, he was proving Jesus of Nazareth to be the Messiah, and working great prodigies to confirm the truths he taught. Some believe he was the cousin of Saul, later Saint Paul; in any case, the latter, still a fire-breathing Pharisee, took offense at his boldness and presided at the scene of his martyrdom by stoning. The fervent deacon, insensible to his own fate, defended Christ before the Jerusalem tribunal with a perfection which enraged the proud authorities of Jerusalem, unwilling to recognize a humble carpenter of Nazareth for their Saviour. He boldly upbraided the chief priests with their hard-hearted resistance to the Holy Spirit. And when he accused them of putting to death, just as their forebears had treated the prophets who foretold Him, the long-awaited Just One announced by Moses, they stoned him without further delay. (Acts of the Apostles, chapter 7)
.
Saint Stephen died, beholding his Lord standing at the right hand of God. He imitated Him in death; crying out, Lord Jesus, receive my spirit! He concluded on his knees, Lord, do not impute to them this sin! And then he fell asleep, the narrative says.
.
His mortal remains were left outdoors to be devoured by beasts, but were protected by God; and Gamaliel, the Doctor of the Law, took the body of the martyr to his own country home, a few leagues from the city, where he buried him. His tomb was discovered miraculously in the fifth century, by the intervention of Gamaliel himself in a priest’s dream. The greater part of his relics are still conserved in the Basilica of Saint Lawrence and Saint Stephen in Rome. His death was the signal for a great persecution of the Christians in Jerusalem, spurred on by Saul, who had approved his death. But Saint John Chrysostom remarks that because Stephen prayed, we have Saint Paul, whose conversion miraculously came about soon afterwards.
.
Prayer to Venerate Any Saint
.
Saint Stephen: Feast Day December 24
.
Rev. 8:3-4 [3] And another angel came, and stood before the altar, having a golden censer; and there was given to him much incense, that he should offer of the prayers of all saints upon the golden altar, which is before the throne of God. [4] And the smoke of the incense of the prayers of the saints ascended up before God from the hand of the angel.
.
ETERNAL Father, I wish to honor St. (Name), and I give You thanks for all the graces You have bestowed upon him (her). I ask You to please increase grace in my soul through the merits of this saint, and I commit the end of my life to him (her) by this special prayer, so that by virtue of Your goodness and promise, St. (Name) might be my advocate and provide whatever is needed at that hour. Amen.
.
PROMISE: “When you wish to honor any particular saint and give Me thanks for all the graces I have bestowed on that saint, I increase grace in your soul through the merits of that saint. When you commit the end of your life to any of the saints by special prayers, I appoint those saints to be your advocates and to provide whatever you need at that hour.”-Our Lord to St. Gertrude
.
Blessed Anne Catherine Emmerich revealed in her Visions that saints are particularly powerful on their feast days and should be invoked then.