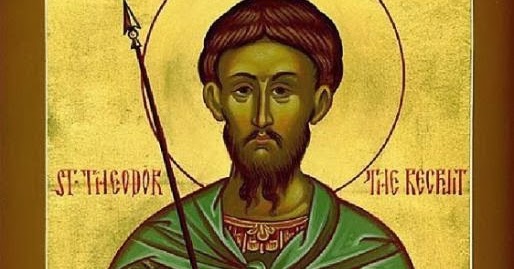 Saint Theodore Tyro, one of the most celebrated of the oriental martyrs, was born of a noble family in the East, and enrolled while still a youth in the imperial army. Early in 306, when he had just joined the legion and marched with its soldiers into the Pont, the Roman Emperor issued an edict requiring all Christians to offer sacrifice. The young man was faced with the choice between apostasy and death. He declared before his commander that he was ready to be cut in pieces and offer up every limb to his Creator, who had died for him. Wishing to conquer him by gentleness, the commander left him in peace for a while, that he might think over his resolution.
He profited from his liberty to fortify other confessors for martyrdom, and in his ardor for the downfall of idolatry he set fire to a temple dedicated to the goddess Cybel, called the mother of the gods. He did not attempt to conceal his act, but when arrested admitted at once that he was the author of it, and that he had undertaken it to prevent the sacrileges committed every day in that place of abomination. The judge could not persuade him to renounce this crime and adore the empire’s divinities; he therefore had him cruelly whipped and then shut up in a solitary cell with the order to give him nothing to eat and let him die of hunger.
Our Lord visited him during the night and consoled him, and He told his servant He Himself would nourish him invisibly. This visit filled him with such joy that he began to sing; and at the same moment, Angels in white robes appeared in his prison, to sing hymns of joy with him. The jailers and guardians all witnessed this spectacle, as did also the judge Publius who had condemned him, but none of them were touched by it. They gave him an ounce of bread and a flask of water every day, only to prolong his martyrdom. The Saint refused these offerings.
When the authorities made him fine promises and attempted to persuade him to conform, he protested that never would he say one word or make one gesture contrary to the fidelity he owed to his sovereign Lord. He was again beaten and tortured with iron hooks, then burnt with torches, and condemned finally to be burnt alive, to punish him for the fire he had ignited. He made the sign of the Cross, and filled with faith, hope and pure love of God, gave up to Him his beautiful soul, victorious and laden with merits. The year was 304. The Christians saw his soul rise to heaven like a flash of light and fire.