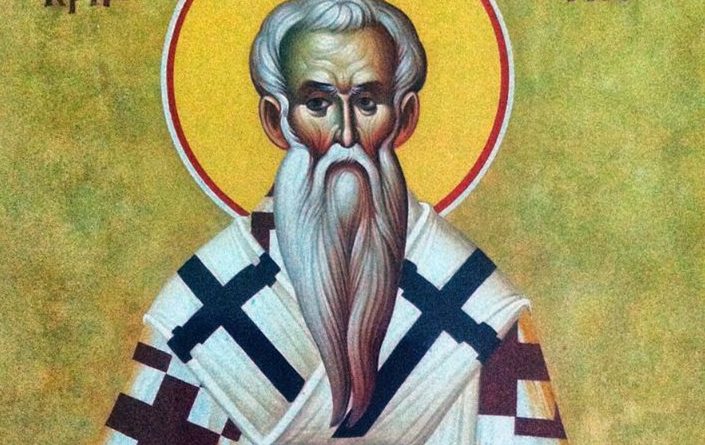 Patronage: Crete
.
Saint Titus was a Greek-speaking convert from paganism and a disciple of Saint Paul, one of the chosen companions of the Apostle on his journey to the Council of Jerusalem. He became his fellow-laborer in many apostolic missions. From the Second Epistle which Saint Paul sent by the hand of Titus to the Corinthians, we gain an insight into the disciple’s character as a peacemaker and an administrator, and understand the strong affection which his master bore him.
.
Titus had been commissioned to carry out a twofold office needing much firmness, discretion, and charity. He was to be the bearer of a severe rebuke to the Corinthians, who were harboring a scandal and were wavering in their faith; and at the same time he was directed to put their charity to the test by calling upon them for abundant alms for the church at Jerusalem. Saint Paul at Troas was anxiously awaiting the result. He writes, I had no peace of mind at Troas, because I did not find there Titus, my brother. (II Cor. 2:13) And he set sail for Macedonia. Here at last Titus brought the good news; his success had been complete. He reported the sorrow, the zeal, the generosity of the Corinthians, and the Apostle was filled with joy, and sent his faithful messenger back to them with the letter of comfort from which we have quoted.
.
Titus was finally left as a bishop on the Island of Crete, where Saint Paul addressed to him the epistle which bears his name. We see from Saint Paul’s Epistle to Titus that this cherished disciple had organized the Christian community, and was engaged in correcting abuses and establishing a clergy. We do not know the history of the final years of Saint Titus from Scripture, only that he was in Dalmatia a short time before the martyrdom of Saint Paul. (Epistle to Timothy 4:10) Writers on Church history state that he died on Crete. His relics are conserved at Venice in the cathedral church of Saint Mark.
.
The mission of Titus to Corinth shows us how well the disciple had learned the spirit of his master. He knew how to be firm and to inspire respect. The Corinthians, we are told, received him with fear and trembling. He was patient and painstaking. Saint Paul gave thanks to God, who had put such solicitude for them in the heart of Titus. And these gifts were enhanced by a quickness to detect and elicit all the good in others, and by a joyousness which overflowed upon the spirit of Saint Paul himself, who abundantly rejoiced in the joy of Titus. (II Cor.2:13)
.
Prayer to Venerate Any Saint
.
Saint Titus: Feast Day February 6
.
Rev. 8:3-4 [3] And another angel came, and stood before the altar, having a golden censer; and there was given to him much incense, that he should offer of the prayers of all saints upon the golden altar, which is before the throne of God. [4] And the smoke of the incense of the prayers of the saints ascended up before God from the hand of the angel.
.
ETERNAL Father, I wish to honor St. (Name), and I give You thanks for all the graces You have bestowed upon him (her). I ask You to please increase grace in my soul through the merits of this saint, and I commit the end of my life to him (her) by this special prayer, so that by virtue of Your goodness and promise, St. (Name) might be my advocate and provide whatever is needed at that hour. Amen.
.
PROMISE: “When you wish to honor any particular saint and give Me thanks for all the graces I have bestowed on that saint, I increase grace in your soul through the merits of that saint. When you commit the end of your life to any of the saints by special prayers, I appoint those saints to be your advocates and to provide whatever you need at that hour.”-Our Lord to St. Gertrude
.
Blessed Anne Catherine Emmerich revealed in her Visions that saints are particularly powerful on their feast days and should be invoked then.