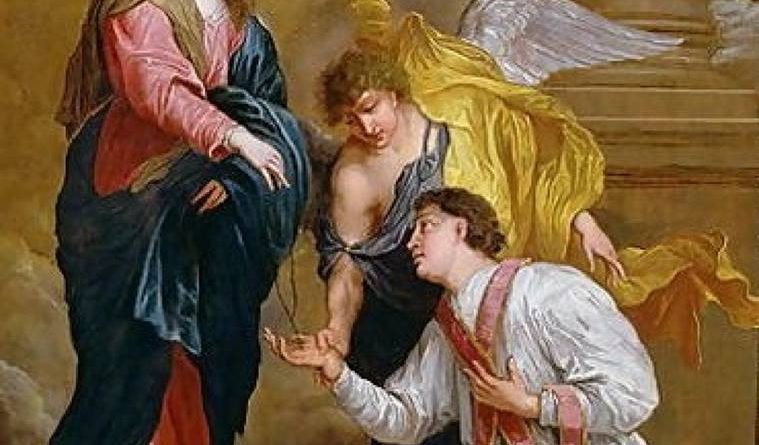 Patronage: affianced couples, against epilepsy, against fainting, against plague, apiarists, bee keepers, betrothed couples, Bussolengo, Italy, engaged couples, greeting card manufacturers, greetings, happy marriages, love, lovers, travellers, young people
.
Valentine was a holy priest in Rome, who assisted the martyrs during the persecution under Claudius II. His great virtue and influence became known, and he was apprehended and brought before the emperor’s tribunal. Why, Valentine, do you want to be the friend of our enemies and reject our friendship? The Christian priest replied, My Lord, if you knew the gift of God, you would be happy, and your empire with you; you would reject the cult of your idols and would adore the true God and His Son Jesus Christ. One of the judges interrupted, asking the martyr what he thought of Jupiter and Mercury. That they were miserable and spent all their lives in debauchery and crime! The judge, furious, cried, He has blasphemed against the gods and against the empire! The emperor nonetheless continued his questioning with curiosity, pleased to have this opportunity to know what Christians thought. Valentine had the courage to exhort him to do penance for the blood of Christians which he had shed. Believe in Jesus Christ, be baptized and you will be saved, and already in this life, you will insure your empire’s glory and the triumph of your arms. Claudius began to be convinced, and said to those in attendance, Hear the beautiful doctrine this man is teaching us! But the prefect of Rome, dissatisfied, cried out, See how this Christian is seducing our prince! Claudius, weakening, abandoned the holy priest to another judge.
.
This man, named Asterius, had a little girl who had been blind for two years. Hearing of Jesus Christ, the Light of the world, he asked Valentine if he could convey that light to his child. Saint Valentine placed his hand on her eyes and prayed: Lord Jesus Christ, true Light, illuminate this blind child! The child saw, and the Judge with all his family confessed Christ and received Baptism. The emperor, hearing of this, would have turned his gaze away from these conversions, but fear caused him to betray his sense of justice. With several other Christians, Saint Valentine was tortured and martyred in the year 268.
.
This illustrious martyr has always been held in great honor in Rome, where there still exists a catacomb named for him.
.
Reflection. In the cause of justice and truth, human prudence should not be consulted; in that case, it is mere human respect. Saint Paul says: The wisdom of this world is foolishness with God. (I Cor. 3:19)
.
Prayer to Venerate Any Saint
.
Saint Valentine: Feast Day February 14
.
Rev. 8:3-4 [3] And another angel came, and stood before the altar, having a golden censer; and there was given to him much incense, that he should offer of the prayers of all saints upon the golden altar, which is before the throne of God. [4] And the smoke of the incense of the prayers of the saints ascended up before God from the hand of the angel.
.
ETERNAL Father, I wish to honor St. (Name), and I give You thanks for all the graces You have bestowed upon him (her). I ask You to please increase grace in my soul through the merits of this saint, and I commit the end of my life to him (her) by this special prayer, so that by virtue of Your goodness and promise, St. (Name) might be my advocate and provide whatever is needed at that hour. Amen.
.
PROMISE: “When you wish to honor any particular saint and give Me thanks for all the graces I have bestowed on that saint, I increase grace in your soul through the merits of that saint. When you commit the end of your life to any of the saints by special prayers, I appoint those saints to be your advocates and to provide whatever you need at that hour.”-Our Lord to St. Gertrude
.
Blessed Anne Catherine Emmerich revealed in her Visions that saints are particularly powerful on their feast days and should be invoked then.