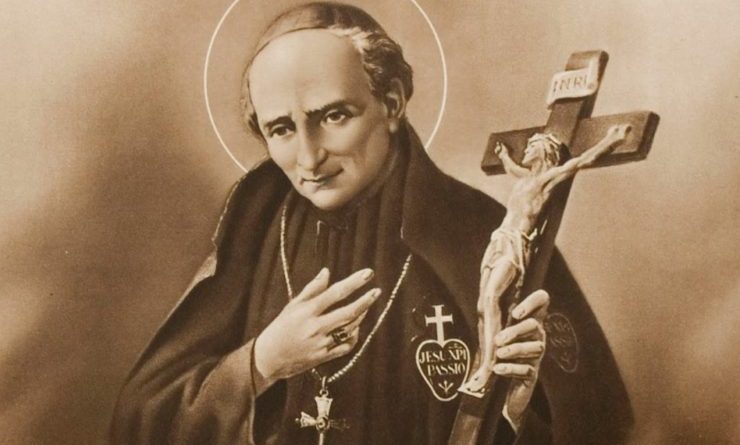 Patronage:Diocese of Macerata-Tolentino
.
Born in 1745 at Civitavecchia near Rome, the son of a wealthy businessman, Saint Vincent Strambi never showed any inclination for any occupation other than the service of God. He found his vocation when after his ordination as a deacon in 1767, he made a retreat amid the Passionists of Monte Fogliano, where Saint Paul of the Cross, their founder, was residing at the time. The Passionist houses are called retreats, and by their Rule must be situated outside cities. Saint Paul of the Cross told his brethren on his deathbed, as he had taught them during his active years, to conserve always the spirit of prayer, solitude and poverty; in that way the apostolic success of their works would also be conserved. The life of contemplation, essential formation for any fruitful works, was what Saint Vincent Strambi already desired.
.
It was formally declared by his last secretary, Monsignor Catervo Serrani, that it would not be temerity to believe that he knew by heart all the works of Saint Thomas Aquinas. The same might have been said of his knowledge of Sacred Scripture. His studies of religion, ever an inexhaustible wealth, continued throughout his lifetime, yet his preaching was so simple that all could easily grasp his thought. He never used notes, but taught according to the needs of his listeners, which he always discerned with exactitude after praying intently at the foot of the crucifix. As he studied, he seemed to see around his desk the faces of his spiritual children, waiting for the bread of life he was destined to break for them. This method of study has been preserved among his followers in the Order; the Passionists think of, and pray for, their future spiritual children before they study.
.
Saint Vincent became a bishop after many years of preaching missions all over Italy. But never could he forget his Order, though he had to put aside its habit. Saint Paul of the Cross on his deathbed had said to him several times: Padre Vincenzino, I recommend to you the poor Congregation. When Saint Vincent asked what he wished him to do, Saint Paul replied: You will do great things! You will do great good! I recommend to you this poor Congregation!
.
As bishop of Macerata and Tolentino, he continued whenever possible to rise at midnight for the divine office, and regretted being unable to dedicate more than five hours to prayer each day. He called in the poor and gave them alms; he visited the hospitals and the prisoners, blessed, embraced and helped them. He visited every religious house of his diocese, then the Canons and the parish priests. He preached for his clergy a beautiful mission, then organized specialized services for the various professions of the laity, saying, the lawyers need different instruction and different sowings than the merchants or the physicians, for example; to each his own portion of the truth! His table was very frugal; never did he permit more than two dishes. He reduced expenditures to a minimum, to be able to give more to the poor.
.
He wished to resign as bishop at the age of seventy-eight, and Pope Leo XII ceded to his wish, but asked him to come to Rome as his counselor. That his life was soon to end was revealed to him, and when the Holy Father was about to die that same year, he offered his life to save that of the Vicar of Christ. He did not say so directly, but told everyone not to be anxious, because the Pope would live. Someone he knew had offered his life for him, he added. The prayer was answered on the very day he said this, December 24th; the Pope rose, suddenly cured. Three days later Saint Vincent was struck by apoplexy, and died on January 1, 1824. He was canonized by Pope Pius XII in 1950.
.
Prayer to Venerate Any Saint
.
Saint Vincent Strambi: Feast Day September 25
.
I desire therefore, first of all, that supplications, prayers, intercessions, and thanksgivings be made for all men: For kings, and for all that are in high station: that we may lead a quiet and a peaceable life in all piety and chastity. For this is good and acceptable in the sight of God our Saviour, Who will have all men to be saved, and to come to the knowledge of the truth.
(1 Timothy 2:1-4)
.
And another angel came, and stood before the altar, having a golden censer; and there was given to him much incense, that he should offer of the prayers of all saints upon the golden altar, which is before the throne of God. And the smoke of the incense of the prayers of the saints ascended up before God from the hand of the angel.
(Rev. 8:3-4)
.
ETERNAL Father, I wish to honor St. (Name), and I give Thee thanks for all the graces Thou has bestowed upon him (her). I ask Thee to please increase grace in my soul through the merits of this saint, and I commit the end of my life to him (her) by this special prayer, so that by virtue of Thy goodness and promise, St. (Name) might be my advocate and provide whatever is needed at that hour. Amen.
.
PROMISE: “When you wish to honor any particular saint and give Me thanks for all the graces I have bestowed on that saint, I increase grace in your soul through the merits of that saint. When you commit the end of your life to any of the saints by special prayers, I appoint those saints to be your advocates and to provide whatever you need at that hour.”-Our Lord to St. Gertrude
.
Blessed Anne Catherine Emmerich revealed in her Visions that saints are particularly powerful on their feast days and should be invoked then.