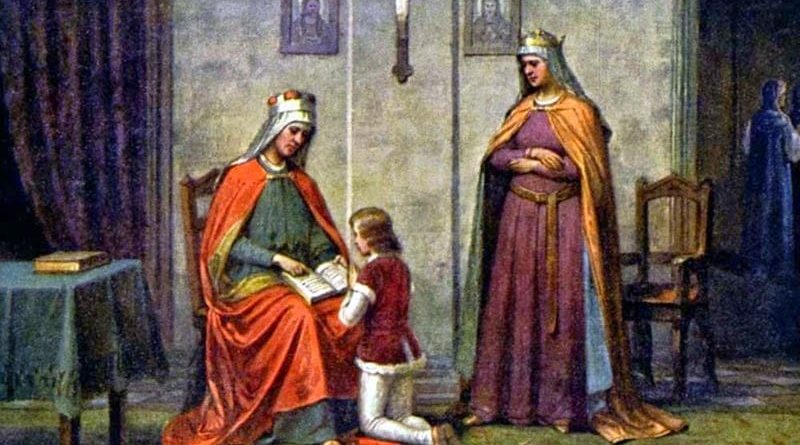 Wenceslas, born towards the end of the ninth century, was the son of a Christian Duke of Bohemia, but his mother was a harsh and cruel pagan. His holy grandmother, Ludmilla, seeing the danger to the future king, asked to bring him up. Wenceslas was educated by her good offices in the true faith, and under her tutelage acquired an exceptional devotion to the Blessed Sacrament. At the death of his father, however, he was still a minor, and his mother assumed the government and passed a series of persecuting laws. In the interests of the Faith, Wenceslas, encouraged by his grandmother, claimed and obtained through the support of the people, a large portion of the country as his own kingdom. Soon afterwards his grandmother was martyred, out of hatred of her faith and services to her country, while making her thanksgiving after Holy Communion.
.
His mother secured the apostasy and alliance of her second son, Boleslas, who became henceforth her ally against the Christians. Wenceslas in the meantime ruled as the brave and pious king of Bohemia. When his kingdom was attacked, the prince of the invading army, which had been called in by certain seditious individuals, was approaching with a lance to slay him. This prince, named Radislas, saw two celestial spirits beside him; he had already seen him make the sign of the cross and then heard a voice saying not to strike him. These marvels so astonished him that he descended from his horse, knelt at the feet of Wenceslas and asked his pardon. Peace was then reestablished in the land.
.
In the service of God Saint Wenceslas was constant, planting with his own hands the wheat and pressing the grapes for Holy Mass, at which he never failed to assist each day. He provided for the poor and himself took what they needed to them at night, to spare them the shame they might incur if their poverty became public knowledge. He desired to introduce the Benedictine Order into his kingdom, but was struck down by a violent death before he could do so and himself enter a monastery, as he wished to do.
.
His piety provided the occasion for his death. After a banquet at his brother’s palace, to which he had been treacherously invited and where he manifested great gentleness towards his brother and mother, he went to pray at night before the tabernacle, as he was accustomed to do. There, at midnight on the feast of the Angels in the year 938, he received the crown of martyrdom by the sword, at the hand of his own brother.
.
Reflection: Saint Wenceslas teaches us that the safest retreat amid the trials of life, or to prepare for the stroke of death, is the sanctuary of Jesus in the Blessed Sacrament.
.
Prayer to Venerate Any Saint
.
Saint Wenceslas
Martyr: Feast Day September 28
.
I desire therefore, first of all, that supplications, prayers, intercessions, and thanksgivings be made for all men: For kings, and for all that are in high station: that we may lead a quiet and a peaceable life in all piety and chastity. For this is good and acceptable in the sight of God our Saviour, Who will have all men to be saved, and to come to the knowledge of the truth.
(1 Timothy 2:1-4)
.
And another angel came, and stood before the altar, having a golden censer; and there was given to him much incense, that he should offer of the prayers of all saints upon the golden altar, which is before the throne of God. And the smoke of the incense of the prayers of the saints ascended up before God from the hand of the angel.
(Rev. 8:3-4)
.
ETERNAL Father, I wish to honor St. (Name), and I give Thee thanks for all the graces Thou has bestowed upon him (her). I ask Thee to please increase grace in my soul through the merits of this saint, and I commit the end of my life to him (her) by this special prayer, so that by virtue of Thy goodness and promise, St. (Name) might be my advocate and provide whatever is needed at that hour. Amen.
.
PROMISE: “When you wish to honor any particular saint and give Me thanks for all the graces I have bestowed on that saint, I increase grace in your soul through the merits of that saint. When you commit the end of your life to any of the saints by special prayers, I appoint those saints to be your advocates and to provide whatever you need at that hour.”-Our Lord to St. Gertrude
.
Blessed Anne Catherine Emmerich revealed in her Visions that saints are particularly powerful on their feast days and should be invoked then.