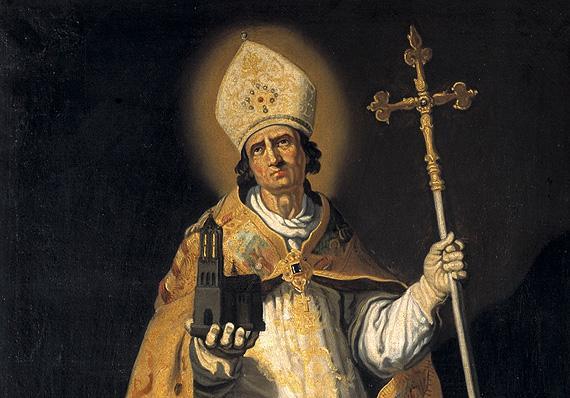 
Apostle of the Frisons, of Holland, Zealand, Flanders and Brabant

Patronage: Convulsions; epilepsy; epileptics; Luxembourg; Netherlands; Archdiocese of Utrecht, Netherlands
Saint Willibrord was born in Northumberland (northeastern England) in 657. His father left the world to enter a monastery, and is honored

as a Saint in the monastery of Echternach in the diocese of Treves, and named in the English calendar. When his son was twenty years old he was already wearing the religious habit. Being accustomed to bearing the yoke of the Lord, and finding it light and sweet, he went to Ireland to seek greater perfection and study under Saint Egbert.
When he was thirty years old he desired, with Saint Swidbert and ten other monks of England, to preach the faith in the land of the Frisons, or Vriesland, a province of the Low Countries surrounding the mouth of the Rhine. The Frisons were warriors and had maintained their liberty against the Romans. The Gospel had been preached among them in 678 by Saint Wilfrid, but those efforts had borne little fruit, and the true God was almost entirely unknown among them when the monks arrived.
Willibrord afterwards went on to Rome to ask the papal benediction and authorization to preach the Gospel to the idolatrous nations; he was amply blessed with powers and relics for the churches he would construct. His companion, Saint Swidbert, became the bishop of a group residing near Cologne. The other eleven missionaries preached in the part of Vriesland belonging to the French. Saint Willibrord was recommended for episcopal consecration by Pepin, royal Palace Steward of France; Pope Sergius changed his name to Clement and consecrated him Archbishop of the Frisons in Saint Peter’s Church in Rome.
He then returned to Utrecht, where he established his residence and built the Church of the Saviour. He repaired the Church of Saint Martin, which later became the Cathedral of Utrecht. He built and governed until his death the abbey of Echternach in Luxembourg. He baptized the son of Charles Martel, named Pepin, who later became king of France. Charles Martel was a benefactor of the churches founded by Saint Willibrord, and conferred on him sovereignty of the city of Utrecht.
Saint Willibrord preached also in Denmark, where a cruel king reigned at that time; the Saint, seeing invincible obstacles to the propagation of the Gospel, merely bought thirty children of the land, whom he baptized and took back with him to Utrecht. He preached on the island of Walcheren, converted many and established several churches. A blow from a saber which an idolatrous priest gave him there made no wound; and the idolatrous priest became possessed by the demon.
Saint Boniface joined him in 720 and spent three years with him before going to Germany. Saint Bede, English historian, wrote of Saint Willibrord, saying he was a venerable old man who had for thirty-six years been a bishop and was awaiting the rewards of life in heaven, after the generous battles he waged in the spiritual combat. At Utrecht Saint Willibrord founded schools which became famous. He wrought many miracles, and had the gift of prophecy. He labored unceasingly as bishop for more than fifty years, beloved alike of God and of man, and died full of days and good works. This amiable Saint, noted for his gaiety in conversation and his wisdom in counsel, was buried in the monastery of Echternach in Luxembourg.
Reflection: True zeal has its roots in the love of God. It can never be idle; it must labor, toil, be doing great things. It glows as fire; it is, like fire, insatiable. Reflect whether this spirit exists in you!
Prayer to Venerate Any Saint
Saint Willibrord: Feast Day November 7
Rev. 8:3-4 And another angel came, and stood before the altar, having a golden censer; and there was given to him much incense, that he should offer of the prayers of all saints upon the golden altar, which is before the throne of God. And the smoke of the incense of the prayers of the saints ascended up before God from the hand of the angel.
ETERNAL Father, I wish to honor St. (Name), and I give You thanks for all the graces You have bestowed upon him (her). I ask You to please increase grace in my soul through the merits of this saint, and I commit the end of my life to him (her) by this special prayer, so that by virtue of Your goodness and promise, St. (Name) might be my advocate and provide whatever is needed at that hour. Amen.
PROMISE: “When you wish to honor any particular saint and give Me thanks for all the graces I have bestowed on that saint, I increase grace in your soul through the merits of that saint. When you commit the end of your life to any of the saints by special prayers, I appoint those saints to be your advocates and to provide whatever you need at that hour.”-Our Lord to St. Gertrude
Blessed Anne Catherine Emmerich revealed in her Visions that saints are particularly powerful on their feast days and should be invoked then.