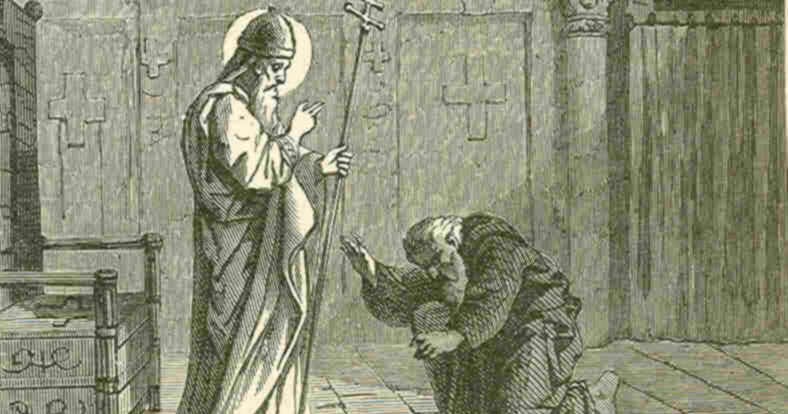 Saint Zephyrinus, a native of Rome, succeeded Victor I in the pontificate in the year 198. In 202 Septimus Severus, a military despot, raised the fifth and most bloody persecution against the Church, which continued for nine years until the death of the emperor in 211. Until this furious storm ended, the holy pastor remained concealed for the sake of his flock, supporting and comforting the distressed disciples of Christ. He suffered by charity and compassion what every confessor underwent. The triumphs of the martyrs were indeed his joy, but his heart received many deep wounds from the fall of apostates and heretics. Nor did this latter affliction cease when peace was restored to the Church. The holy Pope had the affliction of witnessing the fall of Tertullian. He saw to his joy, however, the conversion of Natalis, who had become a heretical bishop when he lapsed into the Theodotian heresy. God, wishing to bring him back to the Church, sent him a solid correction which opened his eyes, and he came to kneel at the feet of the Vicar of Christ, wearing a hair shirt and humbly asking pardon for his revolt.
Eusebius tells us that this holy Pope exerted his zeal so strenuously against the blasphemies of the heretics, that they treated him with the utmost contempt. To his glory, however, they also called him the principal defender of Christ’s divinity. Saint Zephyrinus governed the Church for nineteen years, dying in 217 as a martyr under Antoninus Caracalla. He was buried in his own cemetery on the 26th of August.
Reflection: God has always raised up holy pastors zealous to maintain inviolable the faith of His Church, and to watch over the purity of its morals and the sanctity of its discipline. We enjoy the greatest advantages of divine grace through their labors, and owe to God a tribute of perpetual thanksgiving and immortal praise for all the mercies He has accorded His Church.
Prayer to Venerate Any Saint
Saint Zephyrinus: Feast Day August 27
I desire therefore, first of all, that supplications, prayers, intercessions, and thanksgivings be made for all men: For kings, and for all that are in high station: that we may lead a quiet and a peaceable life in all piety and chastity. For this is good and acceptable in the sight of God our Saviour, Who will have all men to be saved, and to come to the knowledge of the truth. (1 Timothy 2:1-4)
And another angel came, and stood before the altar, having a golden censer; and there was given to him much incense, that he should offer of the prayers of all saints upon the golden altar, which is before the throne of God. And the smoke of the incense of the prayers of the saints ascended up before God from the hand of the angel. (Rev. 8:3-4)
ETERNAL Father, I wish to honor St. (Name), and I give You thanks for all the graces You have bestowed upon him (her). I ask You to please increase grace in my soul through the merits of this saint, and I commit the end of my life to him (her) by this special prayer, so that by virtue of Your goodness and promise, St. (Name) might be my advocate and provide whatever is needed at that hour. Amen.
PROMISE: “When you wish to honor any particular saint and give Me thanks for all the graces I have bestowed on that saint, I increase grace in your soul through the merits of that saint. When you commit the end of your life to any of the saints by special prayers, I appoint those saints to be your advocates and to provide whatever you need at that hour.”-Our Lord to St. Gertrude
Blessed Anne Catherine Emmerich revealed in her Visions that saints are particularly powerful on their feast days and should be invoked then.