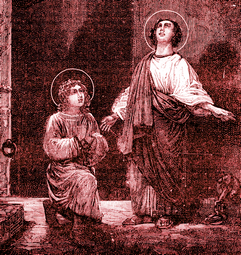 There lived at Nantes an illustrious young nobleman named Donatian, who, having received the Holy Sacrament of regeneration, led a most edifying life and strove with much zeal to convert others to faith in Christ. His elder brother, Rogatian, was not able to resist the moving example of his piety and the force of his discourses and desired to be baptized. But as the bishop had departed and concealed himself during the persecutions, he was not able to receive that Sacrament. Nonetheless, he was shortly afterward baptized in his blood, for he declared himself a Christian at a time when to embrace that sacred profession was to become a candidate for martyrdom.
.
Donatian was sought, first for professing himself a Christian and for having deterred others, particularly his brother, from worshiping the gods. He was apprehended, and having boldly confessed Christ before the governor, was cast into prison and loaded with irons. Rogatian was also brought before the prefect who endeavored first to gain him by flattering speeches. Finding him inflexible, he sent him to prison with his brother.
.
Rogatian grieved that he had not been able to receive the sacrament of Baptism. Donatian prayed for him that his faith might procure for him the effect of Baptism, and the effusion of his blood that of the Sacrament of Confirmation. They passed that night together in fervent prayer. The next day they were summoned again by the prefect, to whom they declared they were ready to suffer for the name of Christ, whatever torments were prepared for them. By the order of the inhuman judge, they were first stretched on the rack, afterward, their heads were pierced with lances and finally cut off, about the year 287.
.
Prayer to Venerate Any Saint
.
Saints Donatian and Rogatian: Feast Day May 24
.
I desire, therefore, first of all, that supplications, prayers, intercessions, and thanksgivings be made for all men: For kings, and for all that are in high station: that we may lead a quiet and peaceable life in all piety and chastity. For this is good and acceptable in the sight of God our Saviour, Who will have all men to be saved and to come to the knowledge of the truth. (1 Timothy 2:1-4)
.
And another angel came, and stood before the altar, having a golden censer; and there was given to him much incense, that he should offer of the prayers of all saints upon the golden altar, which is before the throne of God. And the smoke of the incense of the prayers of the saints ascended up before God from the hand of the angel. (Rev. 8:3-4)
.
ETERNAL Father, I wish to honor St. (Name), and I give Thee thanks for all the graces Thou have bestowed upon him (her). I ask Thee to please increase grace in my soul through the merits of this saint, and I commit the end of my life to him (her) by this special prayer, so that by virtue of Thine goodness and promise, St. (Name) might be my advocate and provide whatever is needed at that hour. Amen.
.
PROMISE: “When you wish to honor any particular saint and give Me thanks for all the graces I have bestowed on that saint, I increase grace in your soul through the merits of that saint. When you commit the end of your life to any of the saints by special prayers, I appoint those saints to be your advocates and to provide whatever you need at that hour.”-Our Lord to St. Gertrude
.
Blessed Anne Catherine Emmerich revealed in her Visions that saints are particularly powerful on their feast days and should be invoked then