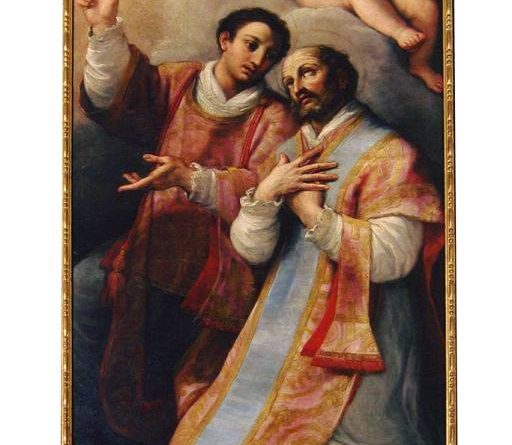 Faustinus and Jovita were brothers, nobly born, and were zealous professors of the Christian religion, which they preached without fear in their city of Brescia in Lombardy, during the persecution of Adrian. Their remarkable zeal excited the fury of the heathens against them, and procured them a glorious death for their faith.

Faustinus, a priest, and Jovita, a deacon, were preaching the Gospel fearlessly in the region when Julian, a pagan officer, apprehended them. They were commanded to adore the sun, but replied that they adored the living God who created the sun to give light to the world. The statue before which they were standing was brilliant and surrounded with golden rays. Saint Jovita, looking at it, cried out: Yes, we adore the God reigning in heaven, who created the sun. And you, vain statue, turn black, to the shame of those who adore you! At his word, it turned black. The Emperor commanded that it be cleaned, but the pagan priests had hardly begun to touch it when it fell into ashes.

The two brothers were sent to the amphitheater to be devoured by lions, but four of those came out and lay down at their feet. They were left without food in a dark jail cell, but Angels brought them strength and joy for new combats. The flames of a huge fire respected them, and a large number of spectators were converted at the sight. Finally sentenced to decapitation, they knelt down and received the death blow. The city of Brescia honors them as its chief patrons and possesses their relics, and a very ancient church in that city bears their names.

Reflection. The spirit of Christ is ever a spirit of martyrdom. It is always the spirit of the cross. The more we share in the suffering life of Christ, the greater share we inherit of His Spirit, and of the fruits of His death. To souls mortified in their senses and disengaged from earthly things, God gives frequent foretastes of the sweetness of eternal life, and ardent desires of possessing Him in His glory. This is the spirit of martyrdom, which entitles a Christian to a happy resurrection and to the bliss of the life to come.