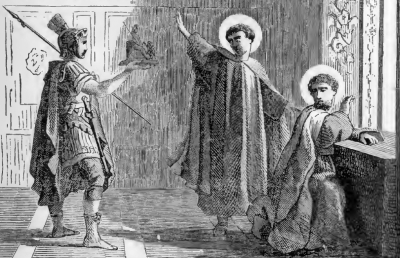 These two Saints were brothers and were officers of the Roman army in the days of Constantine the Great. They served in the house of Constance, daughter of Constantine, who was consecrated to God; their virtues and services to her father rendered them very dear to her. They would soon glorify God by a great moral victory; after despising the honors of the world, they triumphed by their martyrdom over its threats and torments.
.
With the aid of the liberality of the Christian princess, they were practicing many works of charity and mercy, until the deaths of both Constantine and Constance. Then, at the accession of Julian the Apostate to the imperial throne, they resigned their position in the palace. Julian had returned to the cult of idols and was attempting to re-establish it in the empire. The Christian brothers saw many wicked men prosper in their impiety, but were not dazzled by their example. They considered that worldly prosperity accompanied by impunity in sin is the most dreadful of all judgments, indicating reprobation. And history reveals how false and short-lived was the glittering prosperity of Julian.
.
While still in power the apostate attempted to win back these influential officers into active service. When he was refused, he gave them ten days to reconsider. The officer Terentianus, who at the end of that time brought to their house a little idol of Jupiter for their adoration, found them in prayer. In the middle of that night they were decapitated secretly in their own garden, since the emperor feared their execution might cause a sedition in Rome. He instigated a rumor that they had been exiled, but the demons took hold of possessed persons in Rome, and published the fact of their martyrdom everywhere.
.
The son of the officer who had slain them also became possessed, and it was only after their father, Terentianus, had prayed at the tomb of the martyrs that the child was liberated. This so impressed him that he became a Christian, with all his family, and wrote the history we have reported.
.
The martyrs, by their renouncement of favors and their heroic resistance, purchased an immense weight of never-fading glory, and were a spectacle worthy of God. Their house became a magnificent Christian basilica already at the end of the fourth century.
.
Reflection. The Saints always consider that they have done nothing for Christ as long as they have not resisted unto blood and completed their sacrifice, even to pouring forth its last drop if God asks it. We must always bear in mind that we owe to God all that we are, and that after all our efforts, we remain unprofitable servants, doing only what we are bound to do.
.
Prayer to Venerate Any Saint
.
Saints John and Paul: Feast Day June 26
.
I desire therefore, first of all, that supplications, prayers, intercessions, and thanksgivings be made for all men: For kings, and for all that are in high station: that we may lead a quiet and a peaceable life in all piety and chastity. For this is good and acceptable in the sight of God our Saviour, Who will have all men to be saved, and to come to the knowledge of the truth. (1 Timothy 2:1-4)
.
And another angel came, and stood before the altar, having a golden censer; and there was given to him much incense, that he should offer of the prayers of all saints upon the golden altar, which is before the throne of God. And the smoke of the incense of the prayers of the saints ascended up before God from the hand of the angel. (Rev. 8:3-4)
.
ETERNAL Father, I wish to honor St. (Name), and I give Thee thanks for all the graces Thou has bestowed upon him (her). I ask Thee to please increase grace in my soul through the merits of this saint, and I commit the end of my life to him (her) by this special prayer, so that by virtue of Thy goodness and promise, St. (Name) might be my advocate and provide whatever is needed at that hour. Amen.
.
PROMISE: “When you wish to honor any particular saint and give Me thanks for all the graces I have bestowed on that saint, I increase grace in your soul through the merits of that saint. When you commit the end of your life to any of the saints by special prayers, I appoint those saints to be your advocates and to provide whatever you need at that hour.”-Our Lord to St. Gertrude
.
Blessed Anne Catherine Emmerich revealed in her Visions that saints are particularly powerful on their feast days and should be invoked then