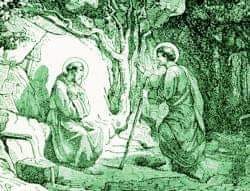 Saint Romanus, born in the late fourth century, left his relatives and spent some time in the monastery of Ainay at Lyons, near a large church at the conflux of the Saône and Rhone. The faithful had built it in honor of the famous martyrs of that region, whose ashes were thrown into the Rhone. His purpose for this retreat was to study all the practices of monastic life, and he obtained from the Abbot of Ainay some recently written books on the lives of the Desert Fathers.
.
At the age of thirty-five, Romanus retired into the forests of Mount Jura, between France and Switzerland, and fixed his abode at a place called Condate, at the conflux of the rivers Bienne and Aliere, where he found a plot of ground fit for culture, and some trees which furnished him with wild fruit. Here he spent his time in praying, reading, and laboring for his subsistence. Lupicinus, his brother, came to him there, accompanied by several other disciples, who then were followed by still others, drawn by the fame of the virtue and miracles of these two Saints. Other monasteries became necessary. Saint Romanus, when he was 54 years old, was ordained a priest by Saint Hilary, Bishop of Poitiers; he remained simple in his conduct and never sought any privileges among his brethren.
.
As their numbers increased, the brothers built several monasteries as well as a convent for their sister and other women, called La Baume; before Saint Romanus died, there were already five hundred nuns cloistered there in prayer and sacrifice. They kept strict silence, and like their brothers, sons or relatives in the nearby monastery of Lauconne, considered themselves as persons dead to the present life.
.
The two brothers governed the monks jointly and in great harmony, though they were of different dispositions; the gentleness of the first was balanced by the severity of the other, according to need. When a group of rebellious monks departed, Saint Romanus, by his patience and prayer, won them back, and if they departed a second or even a third time, received them with the same kindness. When Lupicinus, whose habits were very mortified, reproached him for his leniency, he replied that God alone knew the depths of hearts, and that among those who never departed, there were some whose fervor had declined, whereas some of those who returned after leaving even three times, were serving God in exemplary piety; and finally, that among the brethren who remained outside the monastery, certain ones had religiously practiced the maxims they had learned in the monastery, even becoming priests and authorities for other religious functions or offices.
.
Saint Romanus died about the year 460, and Saint Lupicinus survived him for twenty years.
.
Prayer to Venerate Any Saint
.
Saints Romanus and Lupicinus : Feast Day February 28
.
Rev. 8:3-4 [3] And another angel came, and stood before the altar, having a golden censer; and there was given to him much incense, that he should offer of the prayers of all saints upon the golden altar, which is before the throne of God. [4] And the smoke of the incense of the prayers of the saints ascended up before God from the hand of the angel.
.
ETERNAL Father, I wish to honor St. (Name), and I give You thanks for all the graces You have bestowed upon him (her). I ask You to please increase grace in my soul through the merits of this saint, and I commit the end of my life to him (her) by this special prayer, so that by virtue of Your goodness and promise, St. (Name) might be my advocate and provide whatever is needed at that hour. Amen.
.
PROMISE: “When you wish to honor any particular saint and give Me thanks for all the graces I have bestowed on that saint, I increase grace in your soul through the merits of that saint. When you commit the end of your life to any of the saints by special prayers, I appoint those saints to be your advocates and to provide whatever you need at that hour.”-Our Lord to St. Gertrude
.
Blessed Anne Catherine Emmerich revealed in her Visions that saints are particularly powerful on their feast days and should be invoked then.