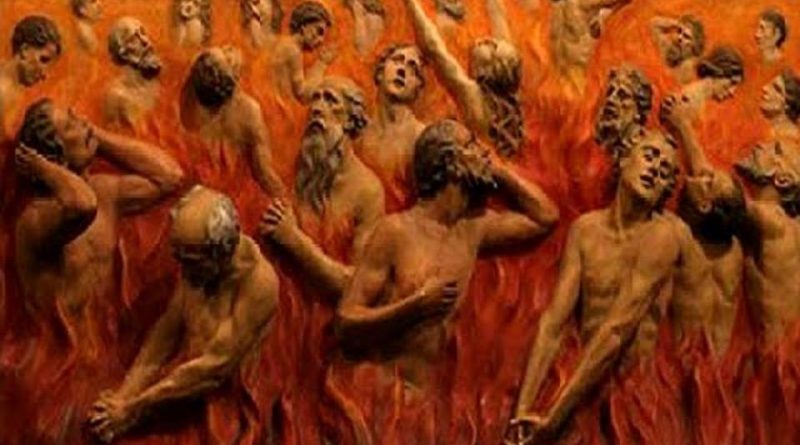 Sister Josefa Menedez never went down into Purgatory, but she saw and spoke with a number of souls who came to solicit her prayers, and some told her that, thanks to her sufferings, they had escaped hell.
.
These souls, as a rule, humbly accused themselves of the faults for which they were in purgatory. One said, “. . . I was given up to a great deal of vanity and on the point of marrying. Our Lord made use of very severe measures to prevent my falling into hell.” (April 10th, 1921) Another said, ” . . . I had a vocation, but lost it by reading bad books; I also had discarded my scapular out of contempt” (July 27th, 1921)
.
“My religious life was wanting in fervor . . . I had a long religious life, but I spent my last years rather in taking care of my health than in loving Our Lord. Thanks to the merits of a sacrifice you make, I was able to make a fervent death, and I owe it to you that I escaped the long years in purgatory I had deserved. The important thing is not so much entrance into religion . . . as entrance into eternity” (April 7th, 1922)
.
” . . . I have been a year and three months in purgatory, and were it not for your little acts I should have remained there many more years. A woman of the world has less responsibility than a religious, for how great are the graces that the latter receives, and what liabilities she incurs if she does not profit by them . . . How little nuns suspect the way their faults are expiated here . . . a tongue horribly tortured expiates faults against silence . . . a dried-up throat, those against charity . . . and the constraints of this prison, the repugnance in obeying those placed above us. . . ! In my order, pleasures were few and comforts still fewer, but one can always manage to secure some . . . and the smallest immortifications have to be expiated here. To restrain one’s eyes, to refuse oneself the gratification of a little curiosity may at times cost a big effort . . . and here . . . the eyes are tormented by the impossibility of seeing God” (April 10th, 1922)
.
“Another nun accused herself of failings against charity, and of having murmured at the election of one of her superiors” (April 12th, 1922)
.
” . . . I have been in purgatory till now . . . because during my religious life I talked a great deal and with little prudence. I often communicated my impressions and complaints, and these indiscretions were the cause of faults against charity which my Sisters then committed.”
.
“Let all learn from this,” commented Our Lady, who was present at the apparition, “for many souls fall into this danger.” Our Lord stressed this grave warning by these words: “That soul is in purgatory because of her faults against silence, for this kind of fault leads to many others: first, the Rule is broken; secondly, there often occurs in such failings sins against charity of religious spirit, personal satisfaction, outpourings of heart that are ill-placed among religious, and all this, without a feeling of responsibility not only for oneself but for one or many others who are led into the same faults. That is why this soul is in purgatory, and burning with desire to see my face” (Feb 22nd. 1923)
.
“I am in purgatory because I did not care enough about the souls confided to me, and because I did not sufficiently realize their value and the devotedness called for by so precious a charge” (Aug 1922)
.
“. . . I was in purgatory a little under an hour and a half to expiate a certain want of confidence in God. True, I always loved Him very much, but not without fear. It is true also that the judgements of religious are severe and rigorous, for we are judged not by our Spouse, but by our God. Nevertheless, during life our confidence in His mercy ought to be boundless, and we should trust His goodness. How many graces are lost by religious who have not enough trust in God” (Sept. 1922)
.
” . . . I am in purgatory because I did not treat the souls that Jesus entrusted to me with care they deserved . . . I allowed myself to be influenced by human motives and natural likes, not seeing in them God, as I should have, and as all Superiors must. For, if it is true that all religious should see in their Superior the Person of God Our Lord, the Superior also ought to see Him in her daughters . . .”
.
“Thanks be to you who have helped to free me from purgatory . . . Oh! if nuns realized how far they can be led by unruly feelings . . . how vigorously they would strive to conquer themselves and master their nature and passions” (April 1923)
.
“My purgatory will be a long one, for I did not accept God’s will for me, nor make the sacrifice of my life generously enough during my illness. Illness is a GREAT grace of purification, it is true, but unless one is careful, it may cause one to stray away from religious life, to forget that one has made vows of Poverty, Chastity and Obedience, and that one is consecrated to God as a victim. Our Lord is all love, certainly, but also all justice.” (Nov. 1923)