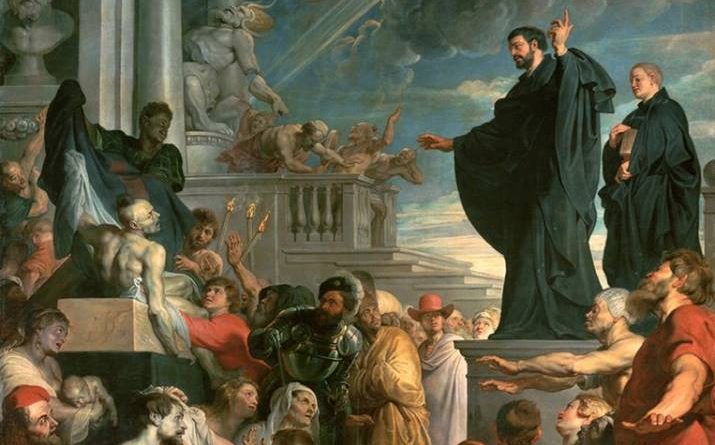 While preaching in Coulan, one of the maritime villages of Travancor near Cape Comorin, Xavier found that the greater part of the people continued to be attached to their ancient superstitions. They listened to him with delight, acknowledged the reasonableness of the Gospel maxims, but did not care to practice them. Finding that he spoke to them of God without producing any effect on their hearts, one day he prayed with extra fervor for their conversion. With his eyes raised to Heaven and his countenance inflamed, he implored God to have pity on those infatuated idolaters: “All hearts, O Lord, are in Thy hands. Thou canst move the most stubborn and soften the most obdurate as it pleases Thee. Glorify on this day the name and Blood of Thy beloved Son.”
.
He felt assured that God had heard his prayer.
.
Turning then to the people, with the air of one inspired, he said, “Since you will not believe my words, believe at least my works. What proof do you require of the truths that I have announced to you?”
.
He, then, recalled that a man had been buried there the preceding day. Resuming his address in the same tone that he had commenced it, he said: “Open the sepulcher that you closed up yesterday and bring out the body. Observe first, however, whether he who was buried is really dead.” The corpse was immediately disinterred and carefully examined. But far from showing any sign of life, putrefaction had already commenced. They took off the shroud, and laid the dead man at the feet of Xavier, who had come to the place of burial. The barbarians beheld the scene with amazement and impatiently waited to see what would happen. St. Francis knelt down and, after a short prayer, addressed himself to the dead body, saying: “I command you in the holy name of the living God to arise, for the confirmation of the Catholic Religion that I announce.” At these words, the dead man arose, with all the appearance of vigorous and perfect health. All present cried out with a loud voice that the God of the Christians was omnipotent and that the law which the great Father announced was true. They cast themselves at his feet and earnestly desired baptism, which they accordingly received.