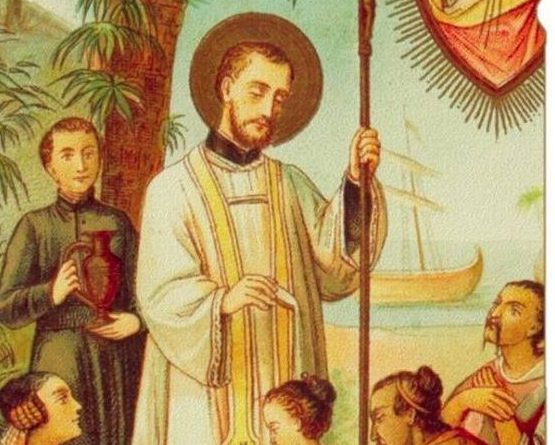 When St. Francis Xavier was at Kagoshima, in Japan, he performed a great number of miracles, of which the most celebrated was the resurrection of a maiden of noble birth. This young damsel died in the flower of her age, and her father, who loved her dearly, believed he would become crazy. Being an idolater, he had no resources in his affliction, and his friends, who came to console him, rendered his grief only the more poignant. Two neophytes (i.e., newly converted Christians) who came to see him before the funeral of her whom he mourned day and night, advised him to seek help from the holy man who was doing such great things, and demand from him with confidence, the life of his daughter. The pagan–persuaded by the neophytes that nothing was impossible to the European bonze (holy man), was beginning to hope against all human appearances, as is usual with the afflicted, who readily believe whatever comforts them–went to Father Francis, fell at his feet, and with tears in his eyes, entreated him to bring to life again his only daughter whom he had just lost, adding that it would be to give life to himself.
.
Xavier, touched by the faith and sorrow of the pagan, went aside with his companion, Fernando, to pray to God. Having come back again after a short time, he said to the afflicted father, “Go, your daughter is alive!”
.
The idolater, who expected that the Saint would come with him to his house and invoke the name of the God of the Christians over his daughter’s body, took this speech as a jest and withdrew, dissatisfied. But scarcely had he gone a few steps when he saw one of his servants, who, all beside himself with joy, shouted from a distance that his daughter was alive. Presently, he beheld her approaching. After the first embraces the daughter related to her father that, as soon as she had expired, two horrible demons pounced upon her and sought to hurl her into a fiery abyss, but that two men, of a venerable and modest appearance, snatched her from the hands of these executioners and restored her life, she being unable to tell how it happened.
.
The Japanese understood who were these two men of whom his daughter spoke, and he led her directly to Xavier to return him such thanks as so great a favor deserved. She no sooner saw the Saint with his companion, Fernando, than she exclaimed: “These are my two deliverers!” And at the same time, the daughter and the father demanded Baptism.