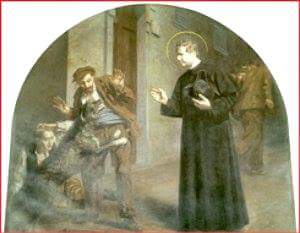 Was it an angel or was it a dog? The life of Don Bosco furnishes us with a remarkable and interesting story of what appears to many an angelic intervention in saving the life of this servant of God from the fierce attacks of the Waldensian heretics, who made several attempts to assassinate him.
.
These heretics were furious at the good done by Don Bosco and sought by violent means to rid themselves of his influence. Some of their adherents were men of the lowest and most vicious type, and these they hired to carry out their nefarious designs.
.
When returning home one night through a bad and dangerous part of the town, he saw a magnificent dog of huge size following him. At first he was frightened but quickly came to see that the dog was friendly. The animal walked by his side and accompanied him to the door of his house and then went away. This happened five, six or eight times. He called the dog Grigio.
.
What did it mean? He was soon to learn.
.
Hastening home by himself, some time after the first appearance of the dog, two shots were fired at him by an assassin from behind a tree. Both shots missed their mark, but his assailant then rushed at and grappled with him. At that moment, Grigio appeared and sank his teeth into the flesh of the would-be murderer, who fled away shrieking with pain.
.
On a second occasion, two men lay in wait for him and threw a sack over his head. This time it seemed all was over with him, but Grigio unexpectedly came to his rescue and jumped at one of the ruffians, seizing him by the throat. The other fled in terror. Don Bosco had then to liberate the first from the fangs of Grigio, who still held him by the throat.
.
A third time, no less than twelve hired assassins, armed with clubs, lay in ambush, into which Don Bosco walked unawares. Again, escape seemed impossible, but once more Grigio bounded into the midst of the group, and his fierce look and savage growl proved enough. The men made off as quickly as they could.
.
Sometimes the dog entered Don Bosco’s house, but always with some reason, either to accompany him on a night journey or to prevent his leaving the house. No amount of animal instinct could explain these unexpected appearances of the dog.
.
On one of these occasions, when Don Bosco tried to go out, the great dog lay across the door and growled in such a menacing way that St. John was forced to remain at home. And it was well that he did so, for shortly afterwards a gentleman arrived to warn him not to leave the house on any consideration, as the heretics lay in wait to kill him.
.
As long as the persecution lasted, Grigio never failed to be at his post and when the danger passed he was seen no more. Whence he came or whither he went no one knew.
.
Ten years later, Don Bosco had to go to the farmhouse of some friends and had been advised that the road was dangerous.
.
“If only I had Grigio,” he said. At once the great dog appeared by his side, as if he had heard the words, giving signs of the greatest joy. Both man and dog arrived safely at the farmhouse and went into the dining room, where the family invited Don Bosco to take part in the evening meal.
.
The dog lay down. No one thought any more of him. When the repast was finished the master of the house proposed to feed the dog. But he was gone! Doors and windows had been closed; how did he go?
.
In 1883, that was more than thirty years after the dog’s first appearance, he appeared once more in a different locality to guide Don Bosco, who had lost his way.
.
How are we to explain those wonderful appearances of the dog, at the most opportune moments and in different localities? Surely we may believe that this was angelic intervention. [Especially is this so because the great dog was never known to eat.