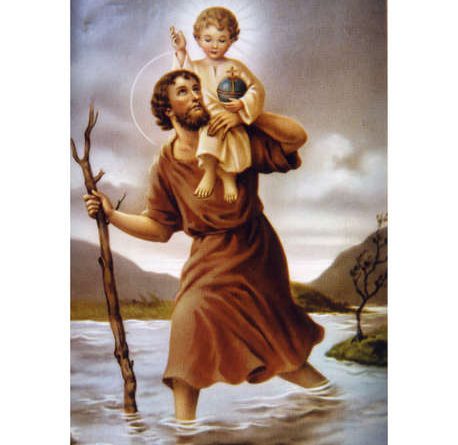 One of the Fourteen Holy Helpers of the Catholic Church.

In Catholic Ancient Tradition that has been passed down from Generation to Generation like many of the Church’s Traditions. This Catholic Tradition concerns Saint Christophorus, and the story of this Great Saint relates: He was born in the land of Canaan, and was named Reprobus, that is Reprobate, for he was a barbarous heathen. In stature and strength he was a giant. Thinking no one his like in bodily vigor, he resolved to go forth in search of the mightiest master and serve him. In his wanderings, he met with a king who was praised as the most valorous man on earth. To him he offered his services and was accepted. The king was proud of his giant and kept him near his person. One day a minstrel visited the king’s castle, and among the ballads he sung before the court was one on the power of Satan. At the mention of this name the king blessed himself, making the sign of the cross. Reprobus, wondering, asked him why he did that. The king replied: “When I make this sign, Satan has no power over me.” Reprobus rejoined: “So thou fearest the power of Satan? Then he is mightier than thou, and I shall seek and serve him.”
.
Setting forth to seek Satan, he came into a wilderness. One dark night he met a band of wild fellows riding through the forest. It was Satan and his escort. Reprobus bravely accosted him, saying he wished to serve him. He was accepted. But soon he was convinced that his new master was not the mightiest on earth. For one day, whilst approaching a crucifix by the wayside, Satan quickly took to flight, and Reprobus asked him for the reason. Satan replied: “That is the image of my greatest enemy, who conquered me on the cross. From him I always flee.” When Reprobus heard this, he left the devil, and went in search of Christ.
.
In his wanderings, he one day came to a hut hidden in the forest. At its door sat a venerable old man. Reprobus addressed him, and in the course of the conversation that ensued the old man told him that he was a hermit, and had left the world to serve Christ, the Lord of heaven and earth. “Thou art my man,” cried Reprobus; “Christ is He whom I seek, for He is the strongest and the mightiest. Tell me where I can find Him.” The hermit then began instructing the giant about God and the Redeemer, and concluded by saying: “He who would serve Christ must offer himself entirely to Him, and do and suffer everything for His sake. His reward for this will be immense and will last forever.”
.
Reprobus now asked the hermit to allow him to remain, and to continue to instruct him. The hermit consented. When Reprobus was fully instructed, he baptized him. After his baptism, a great change came over the giant. No longer proud of his great size and strength, he became meek and humble, and asked the hermit to assign to him some task by which he might serve God, his master. “For,” said he, “I can not pray and fast; therefore I must serve God in some other way.”
.
The hermit led him to a broad and swift river nearby, and said: “Here build thyself a hut, and when wanderers wish to cross the river, carry them over for the love of Christ.” For there was no bridge across the river.
.
Henceforth, day and night, whenever he was called, Reprobus faithfully performed the task assigned to him. One night he heard a child calling to be carried across the river. Quickly he rose, placed the child on his stout shoulder, took his staff and walked into the mighty current. Arrived in midstream, the water rose higher and higher, and the child became heavier and heavier. “O child,” he cried, “how heavy thou art! It seems I bear the weight of the world on my shoulder.”
.
And the child replied, “Right thou art. Thou bearest not only the world, but the Creator of heaven and earth. I am Jesus Christ, thy King and Lord, and henceforth thou shalt be called Christophorus, that is, Christ-bearer. Arrived on yonder shore, plant thy staff in the ground, and in token of my power and might tomorrow it shall bear leaves and blossoms.”
.
And the child disappeared. On reaching the other shore, Christophorus stuck his staff into the ground, and behold, it budded forth leaves and blossoms. Then, kneeling, he promised the Lord to serve Him ever faithfully. He kept his promise, and thenceforth became a zealous preacher of the Gospel, converting many to the Faith.
.
On his missionary peregrinations he came also to Lycia, where, after his first sermon, eighteen thousand heathens requested baptism. When Emperor Decius heard of this, he sent a company of four hundred soldiers to capture Christophorus. To these he preached so convincingly, that they all asked for baptism. Decius became enraged thereat and had him cast into prison.

There he first treated him with great kindness, and surrounded him with every luxury and even sent him two of the most beautiful women in his kingdom to tempt him to sin, but in vain as he ended up converting the two Pagan women to Christ who were shortly Martyred. Then he ordered him to be tortured in the most cruel manner, until he should deny the Faith. He was scourged, placed on plates of hot iron, boiling oil was poured over and fire was lighted under him. When all these torments did not accomplish their purpose, the soldiers were ordered to shoot him with arrows. This, too, having no effect, he was beheaded, on July 25th, 254. Two great saints refer to the wonderful achievements of St. Christophorus which is a further declaration of the truths of the Story of Saint Christopher as Saint Ambrose mentions that this saint converted forty-eight thousand souls to Christ and Saint Vincent Ferrer declares, that when the plague devastated Valencia, its destructive course was stayed through the intercession of Saint Christophorus.
.
.
PRAYERS TO SAINT CHRISTOPHER
.
.
PRAYER IN HONOR OF ST. CHRISTOPHER
.
.
O God, Who did make St. Christopher a true Christ-bearer, who converted multitudes to the Christian faith, and Who gave him the grace to suffer for Thy sake the most cruel torments, through the intercession of this Saint, we implore Thee to protect us from sin, the only real evil. Preserve us also against the harmful forces of nature, such as earthquake, lightning, fire, and flood and In all our Travels. Amen.
.
.
INVOCATION OF ST. CHRISTOPHER
.
Great St. Christopher, seeking and mightiest master which Thou found in Jesus Christ, the Almighty God of Heaven and earth. Faithfully serving Him with all Tjy power to the end of Thy life, gaining for Him countless souls and finally shedding Thine blood for Him, obtain for me the grace to bear Christ always in my heart, as Thou once did, bearing Him on Thine shoulder. So that by this I may be strengthened to overcome victoriously all temptations and resist all enticements of the world, the devil, and the flesh, and that the powers of darkness may not prevail against me. Amen.

PRAYER OF PETITION BY THE MERITS OF SAINT CHRISTOPHER
.
.
My Lord and my God! I offer up to Thee my petition in union with the bitter passion and death of Jesus Christ, Thy Son, together with the merits of His Immaculate and Blessed Mother, Mary ever Virgin, and of all the Saints, particularly with those of the Holy Helper, St. Christopher, in whose honor I say this prayer. Look down upon me, merciful Lord! Grant me Thine Grace and Thy Love, and graciously hear my prayer. Amen.