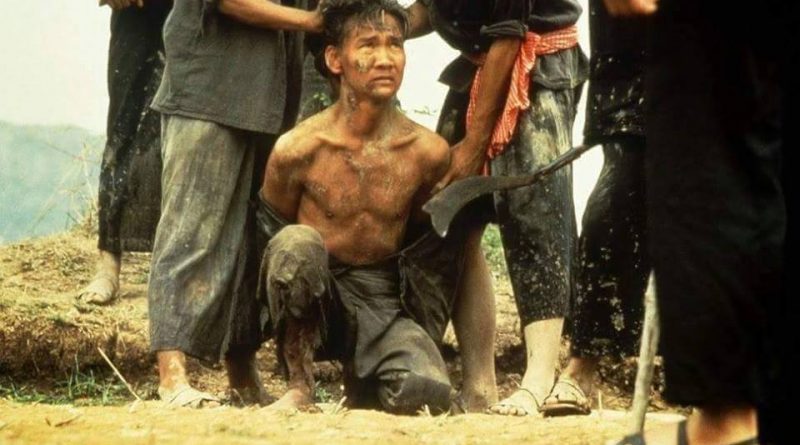 In the village of Siem Riep, Cambodia, Haim, a Christian teacher, knew that the youthful black-clad Khmer Rouge soldiers now heading across the field were coming this time for him …. Haim was determined that when his turn come, he would die with dignity and without complaint. Since “Liberation” on April 17, 1975, what Cambodian had not considered this day? …. Haim’s entire family was rounded up that afternoon. The government called them “the old dandruff,” “bad blood,” “enemies of the glorious revolution,” “CIA agents.” But here’s what they really were: Christians who sought to be faithful to a power higher than the government.
.
The family spent a sleepless night comforting one another and praying for each other as they lay bound together in the dewy grass beneath a stand of friendly trees. Next morning the teenage soldiers returned and led them from their Gethsemane to their place of execution, to the nearby viel somlap, “the killing fields.”
.
The family was ordered to dig a large grave for themselves. Then, consenting to Haim’s request for a moment to prepare themselves for death, father, mother, and children, hands linked, knelt together around the gaping pit. With loud cries to God, Haim began exhorting both Khmer Rouge and all those looking on from afar to repent and believe the gospel.
.
Then in panic, one of Haim’s youngest sons leapt to his feet, bolted into the surrounding bush and disappeared. Haim jumped up and with amazing coolness and authority prevailed upon the Khmer Rouge not to pursue the lad, but allow him to call the boy back. The knots of onlookers, peering around trees, the Khmer Rouge, and the stunned family still kneeling at the graveside, looked on in awe as Haim began calling his son, pleading with him to return and die together with his family. “What comparison, my son,” he called out, “stealing a few more days of life in the wilderness, a fugitive, wretched and alone, to joining your family here momentarily around this grave but soon around the throne of God, free forever in Paradise?” After a few minutes the bushes parted, and the lad, weeping, walked slowly back to his place with the kneeling family. “Now we are ready to go,” Haim told the Khmer Rouge.
.
Few of those watching doubted that as each of these Christians’ bodies toppled silently into the grave which the victims had dug for themselves, their souls soared heavenward to a place prepared by their Lord.
( Taken From Killing Fields, Living Fields: An Unfinished Portrait of the Cambodian Church—the Church That Would Not Die)