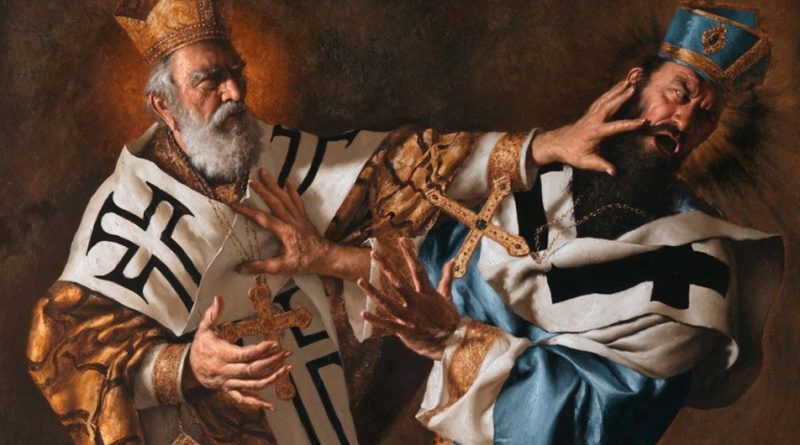 Emperor Constantine had legalized Christianity, the Great Persecution had ceased, but all was not well in Christendom. A heresy had been forming that was beginning to gain a following: Arianism. Arius, a priest from Alexandria, was teaching a doctrine that denied the Trinity and the divinity of Christ. He taught that Jesus Christ was not equal to the Father by nature, but is the first creation of God. Rather than Jesus being both God and man, the Jesus that Aruis described ended up being neither-not quite God and not quite man. To resolve the issue, Constantine called the First Council of Nicaea in 325. It was modeled after the Jerusalem council in Acts, which also is known as the First Ecumenical Council. It is estimated that 1,800 bishops, priests, and deacons were in attendance. Saint Nicholas’s participation is documented by Byzantine historian Theodore the Lector. Saint Methoudius claims that Nicholas beleived Arianism to be a “death-dealing poison” and all of Myra was left untouched by the heresy because of the fervor in which Nicholas attacked this offensive doctrine. At the the Council of Nicaea, Arius presented his case before all the attendees. At some point, Nicholas could no longer tolerate the blasphemies Arius was saying against God, so he got up, walked up to him, and punched Arius in the face, knocking him to the floor. Nicholas’ fellow bishops were outraged that he lost control and hit Arius. The canons of the church forbid clergy from striking any human being, so he was brought before Constantine, who stripped him of his vestments and had him thrown into prison for what would have been the length of the council. Ashamed of his actions, Nicholas prayed to God and asked for forgiveness in the dark of his prison cell. In the night, Jesus Christ and the Virgin Mary appeared to many of the bishops, telling them that no action should be taken against him, since he had acted out of extreme love for God, rather than hate for Arius. Jesus and Mary also visited Nicholas that night. Jesus placed a book of the Gospels in Nicholas’ hands and the Virgin returned to him the bishop’s vestmenst which had been taken away. When the guard came to visit him the next morning, he was surprised to see the broken chains on the floor and the good bishop sitting, dressed in his vestments and peacefully reading Scripture. The Miracle was immediately reported to Emperor Constantine, who immediately ordered that Nicholas return to the Council and the full dignity of his office. This is why on many icons of Saint Nicholas there images of Christ presenting the Gospel book and Mary presenting his vestments.The council lasted from May 20 to June 19, 325 and resulted in the formal condemnation of Arianism and the declaration of the Nicene Creed.