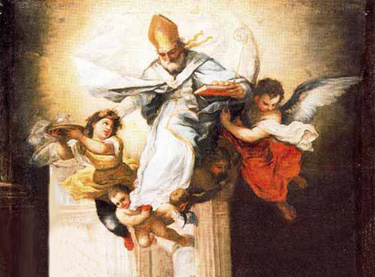 Saint Nicholas was gifted with such high graces, and administered his episcopal functions so well, he always feared that he did not do enough for our Lord and His People and continuously prayed to God to release him from this burden of self doubt that he suffered throughout his life like many of even the greatest Saints suffered similarly to. Our Merciful Lord to show how please Nicholas works were to Him, answered him one day, when Saint Nicholas heard a voice from Heaven, encouraging in his many Holy deeds, saying: “Fear not, Nicholas, I will recompense thy faithful services.” Saint Nicholas was filled with the Love of our Lord that our Merciful Savior would grant him, he who considered himself lacking in service to God, such a Blessing and affirming his works for our Lord was actually pleasing to Him. Our Lord also revealed to him the day and hour of his death, and the Saint, rejoicing even further at knowing he would soon see the Lord. To prepare for his coming death the Saint received with THE Greatest Devotion, the Holy Sacraments, and after a short sickness ended his Holy life quite happily. Thise who witnessed this great Saint’s death described it like this, In his last moments he saw Heaven open, and a great multitude of Angels came to accompany his soul to Heaven. His last prayer was the Psalm, “In Thee, O Lord, have I hoped.” When he came to the words, “Into Thy hands I commend my spirit,” he calmly expired. From his body emanated a miraculous oil, which restored the health of many sick. This oil is still flowing at Bari, in Apulia, where the holy body is enshrined, and is yearly visited by many devout pilgrims.
.
Taken From The Writings of Father Francis Xavier Weninger, 1876.