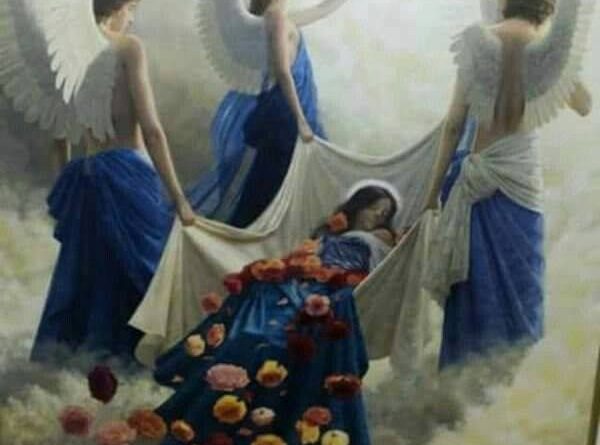 The Dormition of Mary
Father Bourdaloue, a famous preacher of the 17thcentury French court, said in a sermon on the Assumption:
Never was there a death more precious in the sight of God than that of the Virgin, because there was never a life more filled with merits than Hers. The death of the Blessed Virgin was precious not only by the merits which preceded it, but also by the graces and favors which accompanied it. But what made it precious in God’s sight is above all the dispositions of mind and heart with which She received it… What then was Her disposition of mind? She envisaged death in the light of the purest faith, as the fulfillment of her wishes, as the means of being promptly reunited with Her Son and Her God, whose absence had for so long been a source of sorrow for Her. Her disposition of heart? Seeing death in this light, She desired it with all the ardor of the most fervent charity. Far more fervently than Saint Paul She longed to be disengaged from the bonds of the flesh, to live with Jesus Christ…
The bishop of Meaux, Bossuet, preaches in the same vein: If the great Apostle wants to break the bonds of the flesh to go to meet his Master at the Father’s right hand, what must the emotion of a maternal heart be? … And what regret had the Virgin not experienced, seeing Herself separated for so long from a Son whom She loved as She alone could love? … She prayed, Ah, my Lord! permit my love to act! It will soon detach my soul from my mortal body, and transport me to You, in whom alone I live.’ If you believe me, holy souls, you will not labor long to seek any other cause for Her death. This love, so ardent, so strong, so inflamed, could not utter a single sigh incapable of breaking all the bonds of that body; it did not send forth a single desire to heaven which did not take with it the soul of Mary. Ah! I said earlier that the death of Mary was miraculous; now I speak a little differently, and say that it is not so much Her death that is a miracle; Her death is rather the cessation of a miracle. The continuous miracle was that Mary could live, separated from Her Beloved.
We see from these texts why the departure of the soul of Our Lady is not termed a death like that of other mortals, but rather a dormition — a falling asleep in the Lord, as the early Christians called it. (Cf. Acts 7:60) All writers on the subject are unanimous — it was Her supreme love for God, nothing else, which was its cause. Tradition affirms that She knew in advance that Her departure was at hand, and prepared with incredible fervor for the holy moment, when She would hear the voice of Her Son say: Come to Your eternal repose, O blessed Mother: arise and come, You who are My Heart’s friend, the most beautiful of women. The winter is over, the springtime begins; come, My all-beautiful one, My beloved; there is no stain in You; I prefer Your perfumes to all others.