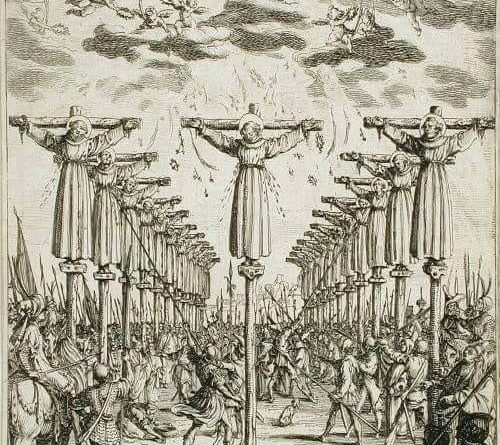 When Saint Francis Xavier came to Japan, this empire was totally plunged in paganism; forty years later, there were more than two hundred thousand Christians, most of them animated with all the fervor of the primitive Church. The jealous demon soon raised up a persecution; a confraternity of martyrdom was at once formed, the object of which was to die for Christ. The pursuits were terrible but only served to bring into light the marvels of the holy Faith. The first martyrs were twenty-six in number: six Franciscans, three Jesuits and seventeen lay Christians, among whom were three young altar boys who had joined the confraternity.
.
A pious Jesuit, crucified, made a touching sermon from the heights of his glorious pulpit, to the pagans surrounding him: At the point where you see me now, he said, I do not think any of you could believe me capable of betraying the truth. Now I declare to you, there is no other means of salvation but the Christian religion! I forgive the authors of my death, I beg them to receive Baptism.
.
Louis, a child of eleven, when he reached the site of execution asked which cross was his; he ran to it with a joy which touched all the spectators. His face shone with a heavenly radiance as he was dying. Anthony, thirteen years old, was begged by his parents not to die so young, to wait until he was older to confess his faith. He replied: Do not expose our holy faith to contempt and the mockery of the pagans. When he was offered riches by the magistrate, he said, I scorn your promises and life itself. The cross is what I desire for love of Jesus, who chose to die on a cross to save us. Then he bade farewell to his parents and promised to pray for them in heaven. A thirteen-year-old named Anthony, from his cross sang the Psalm Laudate, pueri, Dominum, Children, praise the Lord, — and was pierced through the heart when he reached the Gloria Patri.
.
All of Japan became as it were a sea of the blood of some two million martyrs, according to estimates made. Finally in 1848, France overcame the terrible prejudices against Catholicism which its enemies had sown in Japan, in order to obtain commercial privileges, and was admitted and allowed to practice its religion freely.
.
Pius IX canonized these heroes of the Faith on June 8, 1862, amid a great concourse of bishops from all parts of the world.
.
Reflection. If mere children face torture and death with joy for Christ, can we begrudge the slight penance He asks us to bear?