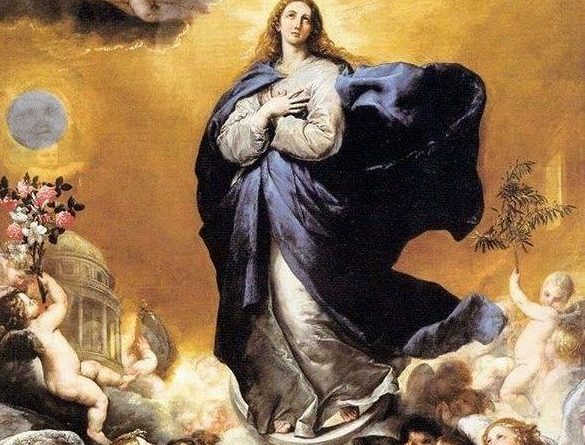 On December 8, 1854, Pope Pius IX proclaimed the dogma of the Immaculate Conception in the apostolic constitution Ineffabilis Deus. A little more than three years later, on February 11, 1858, a young lady appeared to Bernadette Soubirous. This began a series of visions. During the apparition on March 25, the lady identified herself with the words: “I am the Immaculate Conception.”
.
Reading I: Gen. 3:9-15, 20
Reading II: Ephes. 1:3-6, 11-12
Gospel: John Lk. 1:26-38
.
‘Here I am, the servant of the Lord;
let it be with me according to your word.’ (Gospel)
.
Preserved free from all stain of origin sin
.
The Marian dogmas that has been proclaimed by the Holy Catholic Church. Its origin can be traced to the 4 th century. In those early days of the Church, theologians believed and taught that the Blessed Virgin Mary had been kept free of all traces of sin by the grace of God because she was to become the Mother of the Lord Jesus. This belief coexisted with the perpetual virginity of Mary, her sinlessness, and her Divine motherhood. Church history makes known to us that as early as the seventh century, there was a liturgical observance that proclaimed the Blessed Virgin Mary to be free from sin.
.
Centuries later, after consulting with all the Bishops of the world, Pope Pius IX pronounced and defined on December 8, 1854, the Immaculate Conception of the Blessed Virgin Mary in the Ineffabilis Deus. This dogma proclaims that the Blessed Virgin Mary, “in the first instance of her conception, by a singular privilege and grace granted by God, in view of the merits of Jesus Christ, the Saviour of the human race, was preserved free from all stain of original sin, is a doctrine revealed by God and therefore to be believed firmly and constantly by all the faithful.”
.
In simple terms, this dogma proclaims that:
.
1) The entire being of the Blessed Virgin Mary, her physical and spiritual natures, were created by God Himself at her conception; and,
.
2) She who was to become the tabernacle of the incarnation, was never subject to original sin, but was completely preserved from all the effects of the Adamic sin.
.
In other words, the whole being of the Blessed Virgin Mary was created by God immaculate in nature. Mary was the only new and second Eve who was created in an immaculate state which was equal to the state of holiness that the first Eve enjoyed prior to her having disobeyed the Lord God in the Garden of Eden.
.
Researching Marian beliefs during the first thousand years, it is learned through Church documents that in the 8 th century, St. Germanus wrote a sermon on Our Lady’s Falling-Asleep. In his spiritual writings, he perceived that in the Blessed Virgin Mary, there already appeared a threefold incorruption which we shall one day all receive, of body, soul and spirit. In other words, by the grace of God, St. Germanus perceived that the whole being of the Blessed Virgin Mary, soul, spirit and body, had been preserved from all stain of original sin at the first moment of her creation.
.
In Genesis 2:21-3, we learn that God created the first woman who was called Eve. As a result of the woman allowing herself to be tricked by the serpent [Gen. 3:13] and Adam also eating the fruit of the forbidden tree that Eve had given him, [Gen. 3:11-2] both lost the glory and beatific vision that they enjoyed in the Garden of Eden. This blessing that they enjoyed was a conditional gift from God.
.
The conditional gift of God is similar to someone indefinitely granting you and your children and their children the trust of a paradise island as long as not one of you pollute it. If you pollute the island, you will be immediately expelled from it. As such, none of your descendants will be able to enjoy the island because you will have lost your right to it.
.
In the case of Adam and Eve, they were created immaculate in their physical and spiritual natures for the Divine purpose of becoming the holy parents of holy children who would eternally enjoy the beatific vision of God.
.
When tempted by Satan, the angelic being who had rebelled against God, our first parents, Adam and Eve disobeyed God and ate from the forbidden tree. Through their disobedience, sin entered into the world. Consequently, sin was transmitted to the entire human race, depriving all of Adam and Eve’s descendants of the original state of holiness and justice that they enjoyed. [C.C.C. 404]
.
Following the disobedience of our first parents in the Garden of Eden, God said, “I will put enmity between you and the woman, and between your offspring and hers; he will strike your head, and you will strike his heel.” [Gen. 3:15] The seed of the woman who will crush the head of the serpent is Christ, the woman at enmity with the serpent being the Blessed Virgin Mary.
.
As soon as the former Kingdom of God had become corrupted by Satan, the spiritual and physical natures of God’s children became subject to physical and spiritual death as defined by the Council of Trent. (C.C.C. 403) Therefore, God instituted a redemptive plan to reinstate His eternal Kingdom. Through the new Adam, Christ, and the new Eve, the Blessed Virgin Mary, God planned to reclaim His Kingdom and save His people from death.