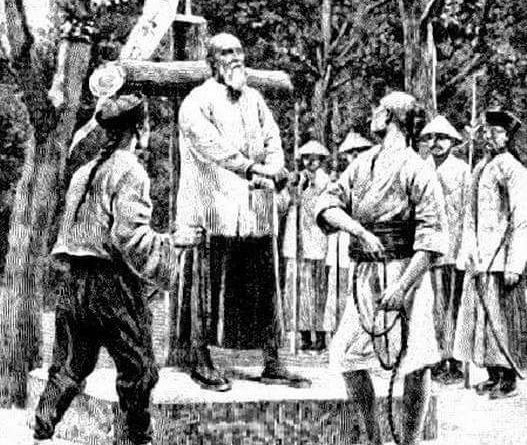 The martyrdom of the Saint Francis Regis Clet was like the rest of his life—obscure, painful, perfect, and complete. Being seized, he was -dragged from prison to prison, interrogated, beaten, and, to some extent, tortured. Yet it is curious to note—and it is of a piece with the rest of his honest, loyal, straight life—that he finds, according to his own letters, many friends in his imprisonment, both Christians and heathens, both fellow-prisoners and magistrates and gaolers, and that he wrote, in the very last months of his life, and while in prison, a memoir which he wished to be published anonymously in France, comparing the prisons of China with those of his own native Christian land, very much to the disadvantage of the latter. At last, the edict came from Pekin; his companions were released, but he was to die. One morning very early—it was February 18, 1820—a day of snow and damp and cold—the satellites came to his cell and bade him follow them. “Am I leaving for good ?” said the martyr. They hesitated. “Tell me the truth,” he insisted. Then they admitted that he was to return no more. Thereupon the face of the holy missionary lighted up with joy. He begged for one instant’s delay and turned to a fellow priest for the last absolution. The soldiers tried to make him put on better clothing than the old and ragged garments he was wearing. But he said he would like to die, not as a martyr, but as a penitent. Then he said a word to the Christians who had come round him and were weeping bitterly. He told them they should rejoice that he was to have the happiness of dying for Jesus Christ. “Serve God fervently,” he said, “and never give up your holy faith.” He was to die by strangulation. They took him outside the town, to the commonplace of execution. There a gallows were erected in the form of a cross, like that on which Blessed John Gabriel Petboyre suffered. They let him pray for a few moments ; then he offered his hands to be bound, and he was tied up on the cross. Strangulation ought to be a short and easy death; but the Chinese executioner knew how to make it painful, and there is reason to believe that Francis Clet underwent a long and cruel agony, and after death, his body seems to have been trampled on by the executioner. But like the rest of his life, this last scene was shrouded from sight, in the half-light of a winter’s morning, the few spectators being kept at a distance by the snow and the mud. But God saw it all. And so his soul passed to God, and his worn-out body fell on the soil of China, to be the seed of the harvests of heaven.
.
In 1869, his precious remains were brought to France, in spite of the efforts of the native Christians to keep them ; they now repose near those of Blessed John Gabriel Perboyre, in the mother-house of the Vincentian Fathers in Paris.