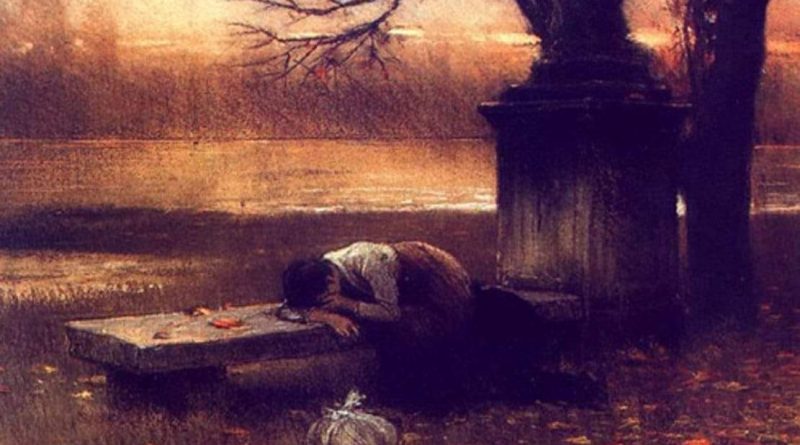 A Polish prince who, for some political reason, had been exiled from his native country bought a beautiful castle and property in France.
.
Unfortunately, he had lost the Faith of his childhood and was at the time of our story engaged in writing a book against God and the existence of a future life.
.
Strolling one evening in his garden, he came upon a poor woman weeping bitterly. He questioned her as to the cause of her grief.
.
“Ah! Prince,” she replied, “I am the wife of Jean [John] Marie, your former steward, who died two days ago. He was a good husband to me and a faithful servant to Your Highness. His sickness was long and I spent all our savings on the doctors, and now I have nothing left to get Masses said for his soul.”
.
The Prince, touched by her grief, said a few kind words and, though professing no longer to believe in a future life, gave her some gold coins to have Masses said for her husband’s soul.
.
Some time after, it was again evening, and the Prince was in his study working feverishly at his hook.
.
He heard a loud rap at the door and without looking up called out to the visitor to come in. The door slowly opened and a man entered and stood facing the Prince’s writing table.
.
On glancing up, what was not the Prince’s amazement to see Jean Marie, his dead steward, looking at him with a sweet smile.
.
“Prince, ” he said, “I come to thank you for the Masses you enabled my wife to have said for my soul. Thanks to the saving Blood of Christ, which was offered for me, I am now going to Heaven, but God has allowed me to come and thank you for your generous alms. “
.
He then added impressively: “Prince, there is a God, a future life, a Heaven and a Hell. “
.
Having said these words he disappeared.
.
The Prince fell upon his knees and poured forth a fervent Credo ( I believe in God.. “).
.
Why We Should Pray for the Souls in Purgatory
.
“The Holy Souls are eager for the prayers of the faithful which can gain indulgences for them. Their intercession is powerful. Pray unceasingly. We must empty Purgatory!” — Saint Padre Pio