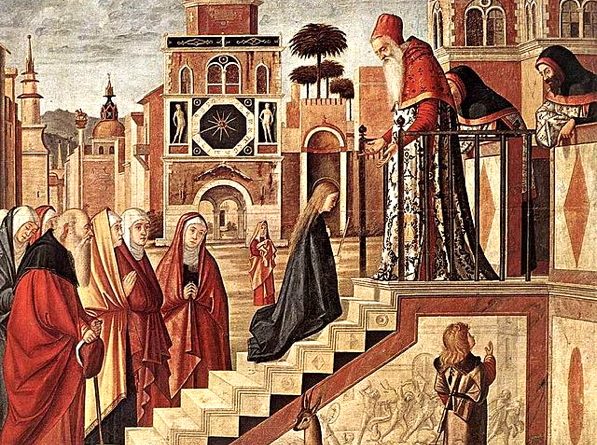 Religious parents never fail by devout prayer to consecrate their children to God, His divine service and love, both before and after their birth. Some among the Jews, not content with this general consecration of their children, offered them to God in their infancy, by the hands of the priests in the Temple, to be brought up in quarters attached to the Temple, attending the priests and Levites in their sacred ministry. There were special divisions in these lodgings for the women and children dedicated to the divine service. (III Kings 6:5-9) We have examples of this special consecration of children in the person of Samuel, for example. Today the Church celebrates the feast of the Presentation of the Blessed Virgin Mary in the Temple of Jerusalem. It is very probable that the holy prophet Simeon and the prophetess Anna, who witnessed the Presentation of Jesus in the Temple, as we read in the second chapter of the Gospel of Saint Luke (verses 25 ff.) had known His Mother as a little girl in the Temple and observed her truly unique sanctity.
It is an ancient and very trustworthy tradition that the Blessed Virgin was thus solemnly offered in the Temple to God at the age of three by Her parents, Saint Anne and Saint Joachim. The Gospel tells us nothing of the childhood of Mary; Her title Mother of God, eclipses all the rest. Where, better than in the Temple, could Mary be prepared for Her mission? Twelve years of recollection and prayer, contemplation and sufferings, were the preparation of the chosen one of God. The tender soul of Mary was adorned with the most precious graces and became an object of astonishment and praise for the holy Angels, as well as of the highest complacency for the adorable Trinity. The Father looked upon Her as His beloved Daughter, the Son as One set apart and prepared to become His Mother, and the Holy Ghost as His undefiled Spouse.
Here is how Mary’s day in the Temple was apportioned, according to Saint Jerome. From dawn until nine in the morning, She prayed; from 9:00 until 3:00 She applied Herself to manual work; then She turned again to prayer. She was always the first to undertake night watches, the One most applied to study, the most fervent in the chanting of Psalms, the most zealous in works of charity, the purest among the virgins, Her companions, the most perfect in the practice of every virtue. On this day She appears as the standard-bearer for Christian virginity: after Her will come countless legions of virgins consecrated to the Lord, both in the shadow of the altars or engaged in the charitable occupations of the Church in the world. Mary will be their eternal Model, their dedicated Patroness, their sure guide on the paths of perfection.