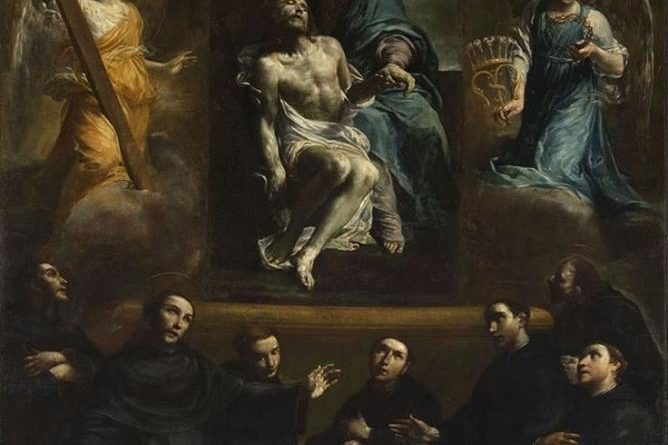 Can you imagine seven prominent men of any large modern city banding together, leaving their homes and profession, and going into solitude for a life directly given to God? That is what happened in the cultured and prosperous city of Florence in the middle of the 13thcentury. At this time, the city was torn with political strife as well as by the heresy of the Cathari; morals were low and religion neglected.
.
On the feast of the Assumption in 1233, seven of the members of a Florentine Confraternity devoted to the Holy Mother of God were gathered in prayer under the presidency of Alessio Falconieri. The Blessed Virgin appeared to the young men and exhorted them to devote themselves to Her service, in retirement from the world. It was in 1240 that they decided to withdraw together from the city to a solitary place for prayer and the service of God. The eldest was Buonfiglio Monaldo, who became their leader. The others were Alexis Falconieri, Benedict dell’Antella, Bartholomew Amidei, Ricovero Uguccione, Gerardino Sostegni, and John Buonagiunta. Their aim was to lead a life of penance and prayer, but they soon found themselves disturbed by increasing numbers of visitors. They next retired to the deserted slopes of Monte Senario near Florence, where the Blessed Virgin appeared to them again. There the nucleus of a new Order was formed, called Servants of Mary, or Servites, in recognition of their special manner of venerating the Seven Sorrows of Our Lady.
.
In 1244, under the direction of Saint Peter of Verona, O.P., this small group adopted a religious habit similar to the Dominican habit, choosing to live under the rule of Saint Augustine. The new Order took a form resembling more the mendicant friars than the older monastic Orders. One of the most remarkable features of the new foundation was its wonderful growth. Even in the fourteenth century, the Order had more than one hundred convents in several nations of Europe, as well as in India and on the Island of Crete. The Rosary of the Seven Sorrows is one of their regular devotions, as is also the Via Matris, or Way of the Cross of Mary.